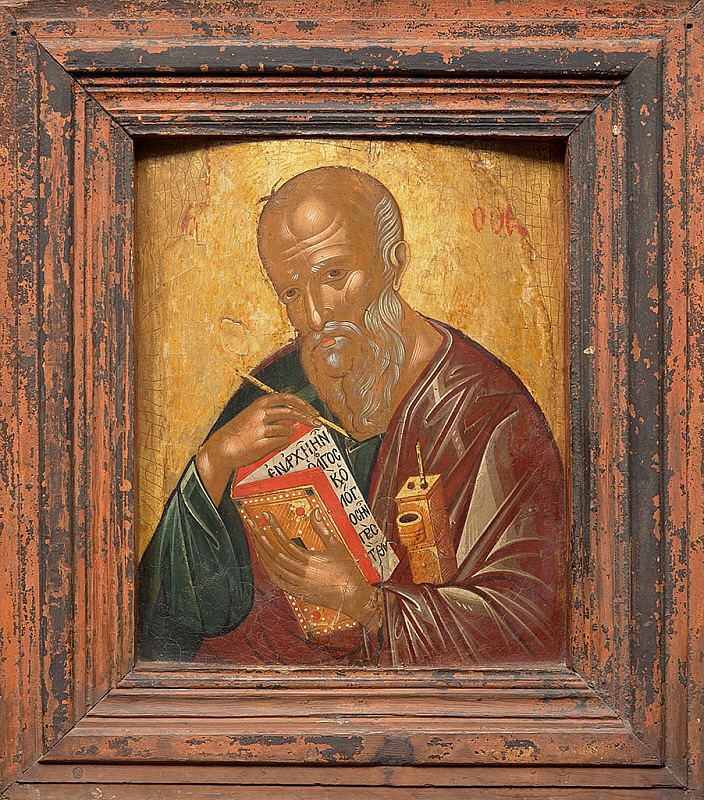 The ample figure in this painting is turned to his right, and though he is nearly bald, he wears a heavy, white beard. He holds an upright, half-open book bearing the beginning of his Gospel in black lettering (“In the beginning was the word, and the word was with God” John 1:1). A reed pen and a rectangular pen case with ink reservoir are tucked under his left arm. Together these elements signal a well-known depiction of Saint John the Evangelist. In almost every respect– the meticulous portrayal of the hairs of the beard, the slight bend in the robe as it falls from the neck, the smooth contour of the ear, and the near closure of the patterns on the forehead and brow—the Menil icon resembles one of Saint John at the Vatopedi Monastery on Mount Athos attributed to the circle of icon painter Andreas Ritzos (1422–1492). In known depictions by Ritzos, the words of the Gospel are only partially visible; a portion of each line is usually masked by the book’s narrow opening. Here, however, the complete text is bunched along the edge of page. This fidelity to the word at the expense of what the eye would actually see suggest a follower, albeit a finely trained one.