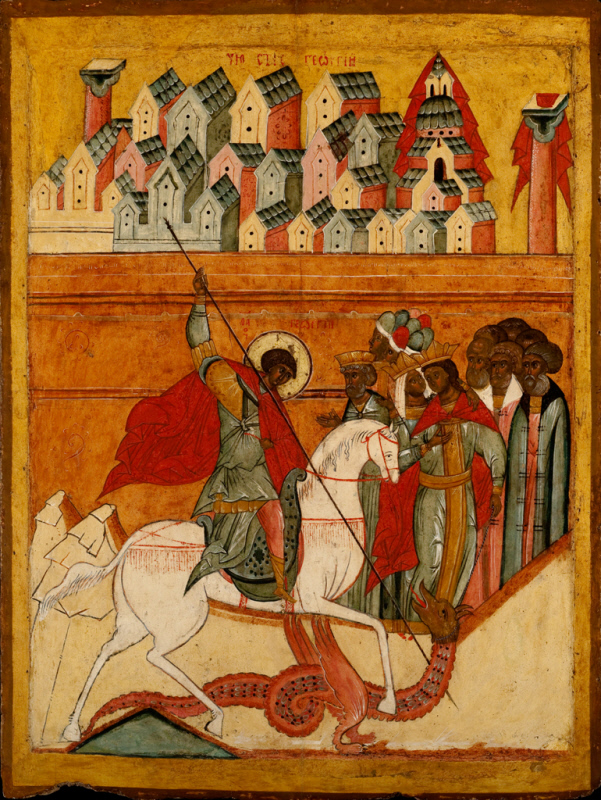 Saint George and the Dragon, early 16th century
Inscribed: Miracle of Saint George with the Dragon / Saint George
Russian Byzantine
Russia, Novgorod school
Tempera and tinted metal leaf on canvas mounted on wood
37 × 27 5/8 × 7/8 in. (94 × 70.2 × 2.2 cm)
Painting
Dedicated by the Board of Directors of Menil Foundation, Inc. in honor of Bertrand Davezac for his more than twenty years of service to The Menil Collection.
1983-041 DJ

The saint is identified by an abbreviated inscription in vermilion at the top of the icon, Чю[дo] C[вя]т[o]ro Гeopгий (sic; Miracle of Saint George with the Dragon), and another just over his head, Ὁ Ἅγιος Гeopгий (Saint George).1 The legend of Saint George and the Dragon, the Christian counterpart of the antique myth of Perseus’s rescue of Andromeda from another dragon, is one of the many feats that made the saint popular across the Orthodox Christian world and earned him the stature of megalomartyr.2 Nine churches in Constantinople were dedicated to him.3 The Crusades popularized his cult in the West, and he became England’s patron saint in the 12th century.4

The artist of this icon conformed to established iconography. The saint is portrayed as a mounted knight spearing the monster in the presence of the royal family, who stand in front of a crowd outside the city wall. The princess, visible between her parents, is understood to have been the dragon’s next intended victim. Although engaged in the events, the white thoroughbred, shown with one leg hidden behind the dragon’s wing—possibly a unique occurrence—is prancing majestically away from the scene. The climactic reverse extension of the soldier’s raised arm, showing him both preparing and executing the kill, exhibits the typical medieval, or non-classical, telescoping of time.

The radiance of the palette is characteristic of the Novgorod area of Russia. Above the chromatic keynote of the wall, the lines are rigid and stubbornly disciplined; below, they flow. The generally bright color scheme and fluid lines poeticize the violence of the drama, turning it into an innocent fairy tale. The icon is made up of two carved limewood panels with two splines. There is a small area of missing ground, which has been imperfectly filled in with gesso and a thin coat of light yellow pigment.

Bertrand Davezac, Imprinting the Divine: Byzantine and Russian Icons from The Menil Collection (2011)

2. The earliest known image of the rescue of the princess is in an 11th-century Georgian manuscript (translated ibid., 140–42), but it reached Russia by the end of the century. The earliest Russian one is at the Church of Saint George, Staraya Ladoga, in the Leningrad Oblast, 1167 CE; see Viktor Nikitich Lazarev, Old Russian Murals and Mosaics: From the XI to the XVI Century, trans. Boris Roniger and rev. Nancy Dunn (London: Phaidon, 1966), 106, pl. 84.