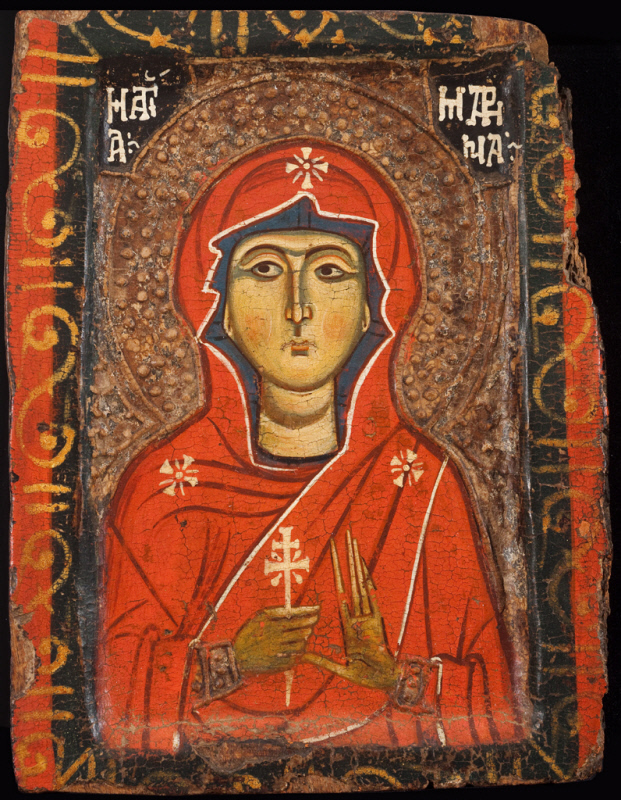 Learn More
Saint Marina, identified here by the inscriptions, was imprisoned and martyred during the reign of the Roman emperor Diocletian (284­–305 CE). Her cult began shortly after her death and grew substantially during the Crusades (1095–1291 CE). The double barred cross in her right hand and the repelling gesture of her left allude to demonic temptations, specifically Satan in the form of a dragon, that she warded off while in prison. The icon has a number of traits characteristic of regions under the cultural influence of the Kingdom of Jerusalem (1099–1291 CE), which included Turkey (Antioch), Palestine, Cyprus, and Lebanon. Prompted by the presence of European artifacts and artists in the area, a new style of icon painting emerged as French and Italian sensibilities were combined with the region’s Byzantine traditions. Specifically, the high relief gesso, most noticeable in the raised nodules surrounding the halo and cuffs and carried over to the background, simulates a metallic facing like that found over many icon paintings. The raised red and green borders ornamented with yellow inverted S-shapes and twin horizontal bars have been found on metal objects produced by Western craftsmen in Palestine and Sinai. The combination of these features points to 13th-century Tripoli as the source of this icon.