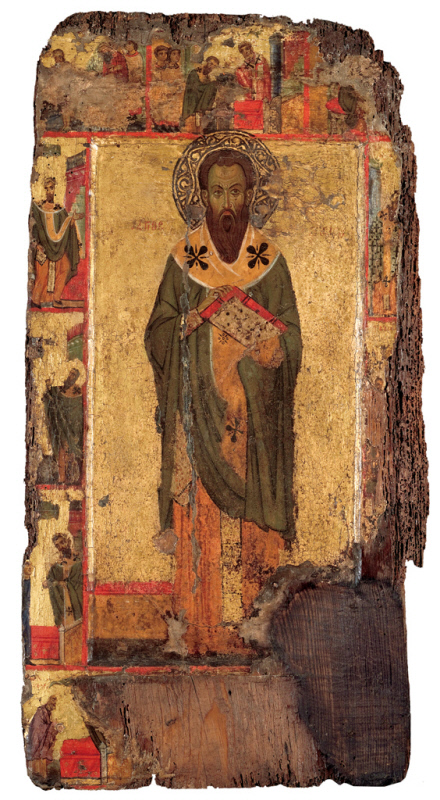 Although the inscription labeling this saint is lost, three elements identify him as Basil the Great: 1) his long black beard, 2) the distinctive shape of the crosses, known as cross pattées, on his omophorion (ecclesiastical shawl), and 3) the biographical scenes that surround him.   One of the oldest icons in the Menil’s collection, Saint Basil with Scenes from His Life is also one of the earliest known Vita icons (defined by the framing of a saint with depictions of events from his or her life) outside of those produced at Saint Catherine’s Monastery on Mount Sinai. That the 4th century bishop, Basil of Caesarea, was selected to be the subject of a vita icon indicates the esteem in which the saint was held posthumously. Though he is credited with performing a number of miracles, Basil was primarily revered for the monastery and hospital that he built and for authoring one of the most frequently used liturgies in the Orthodox church. Basil’s many influential writings are represented in this depiction by the gold and vermillion book that he grasps with both hands. The patterned gesso relief in Saint Basil’s halo suggest an origin on the island of Cyprus; however, its color scheme is comparable to Egyptian icons from the same period. Scholars have noted stylistic and iconographical similarities between works from Sinai and nearby Cyprus during the Crusader period (1095–1492), possibly due to the influence of artists traveling between the two regions.