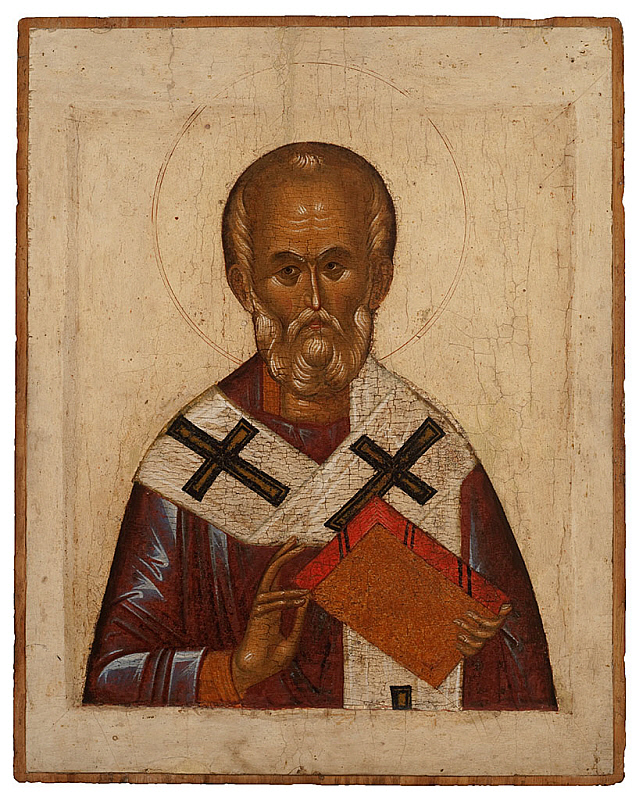 Saint Nicholas, a 4th-century bishop of Mira (a port city in modern-day Turkey), became combined with ideas from pagan folklore over the course of several centuries, eventually evolving into the benevolent, gift-giving figure of Santa Claus in Western Europe. However, in the Orthodox church he is often pictured as he is shown here: an elderly bishop with a high forehead and a short, parted, white beard. In his left hand Saint Nicholas holds a gospel and blesses it with his right. Scholars have attributed this particular icon to the first quarter of the 14th century and believe it to have been made in Istanbul (Constantinople) or by a painter who trained there. This attribution has been complicated by the fact that probably in the 18th or 19th century the saint’s image was silhouetted and placed into a separate wooden panel. Traces of gold indicate that the background was originally gilded, and filled-in nail holes show that the icon once included a revetment, a decorative metal (usually silver or gold) cover placed over panel paintings. This kind of treatment was a technique developed in Russia to conserve early icons for ecclesiastical and liturgical purposes. Well into the 19th century, Russian Orthodox believers made pilgrimages to ancient monasteries in the former Byzantine Empire, where they acquired icons for their local churches or for their own collections. These travelers created and shaped a connection between the Russian Orthodox church and its Byzantine prototype for centuries.