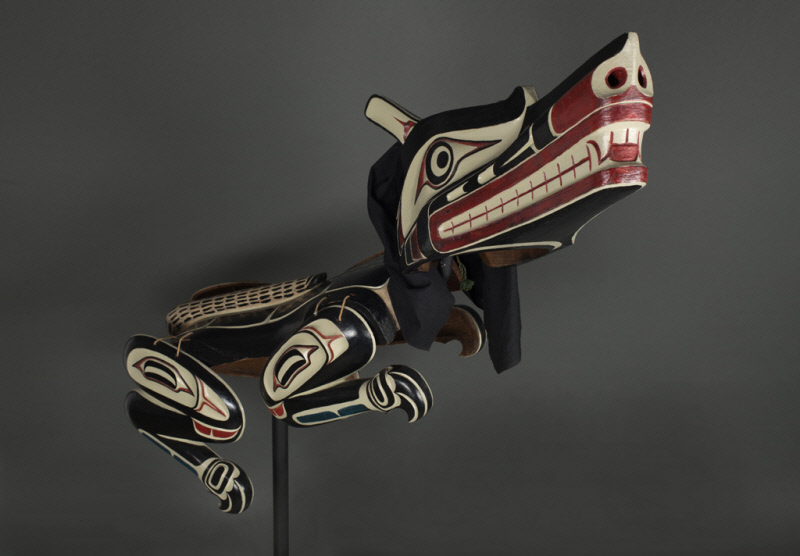 Native to the traditional lands of the Kwakwaka'wakw peoples of British Columbia, wolves are cunning, cooperative pack hunters—superior predators on land. Groups of men and women dance and sing wolf headdresses for the Długwala (“possessing supernatural power”) dance that is part of the annual Tseka or Winter ceremonial potlatch and for the larger Walasaxa’akw ceremony. The Kwak’wala word for “wolf” is u’ligan, but people call this type of headdress xisiwe­’, which art historian Bill Holm translated as “teeth on the forehead.” Dancers wear the xisiwe’ on top of their heads like a hat or helmet. The body of the wolf would rest on the wearer’s shoulders and back, secured to the torso with rope. Kwakwaka'wakw traditionally used natural pigments to make the black, white, and red colors, but the artist of this xisiwe’ used high-gloss commercial enamel paints that became fashionable during the early 20th century.

Attributed to Willie Seaweed (1873–1967), a carver of the 'Nakwaxda'xw nation of Kwakwaka'wakw peoples, this headdress and body mask represents a snarling wolf ready to pounce. In his monograph on Willie Seaweed, Holm recounted that the artist made an analogous headdress, without the body, for the daughter of Chief Tom Patch Wamiss (1895–1963). She was a descendant of Kawadilikala, the eldest male sibling of four wolf-humans in the creation histories. Seaweed and other Kwakwaka'wakw carvers, many of whom collaborated with Seaweed, replicated this original wolf headdress because of the innovative and bold carving that accentuate its fierceness.

Reportedly carved by Seaweed around 1930, this xisiwe’ also tells the story of Kwakwaka'wakw resistance to Euro-American settler colonialism and surreptitious practice of their cultural heritage during the 19th and early 20th centuries. The Canadian government passed the first laws banning potlatches in 1884; it remained in effect until the early 1950s. Christian missionaries aided by converted native informants, confiscated masks, rattles, and other items associated with the ceremonies. During the 1920s, mass arrests and criminal trials of Kwakwaka'wakw and other indigenous peoples nearly ended the practice. Potlatches persisted despite this adversity. Commissioning new work from Seaweed and other carvers, Chief Tom Patch Wamiss formally revitalized Kwakwaka'wakw tradition in the 1950s. This xisiwe’ is among those early examples made between the 1920s and 1950s, a time often referred to locally as “the dark years.”

The de Menils purchased this xisiwe’ from the New York-based gallerist Gaston de Havenon in 1973, but the history of previous owners predating the de Menils’ purchase is frustratingly more elusive. Given the type of paint and multiple versions of this particular headdress, this xisiwe’ probably was a commission in the 1930s for one of Seaweed’s several patrons. Bill Holm, who befriended Seaweed in the late 1950s, worked with the de Menils on their permanent collection. He attributed this xisiwe’ to the Kwakwaka'wakw carver and believed it to be among his work from around the 1930s. Seemingly in defiance of the ban, Seaweed’s work was already in high demand by this time. He sold works to his clients and, according to Holm, only rarely declined a commission. “Until 1951,” Holm writes, “when those prohibitions were quietly dropped, almost every creative act of Willie Seaweed was technically against the law!” When Chief Tom Patch Wamiss held the first Kwakwaka'wakw potlatch in the 1950s after the ban ended, he commissioned new potlatch regalia from Seaweed and other Kwakwaka'wakw carvers for these ceremonies. When new works became part of the potlatch tradition, community leader/carvers like Wamiss and Seaweed would often sell their existing headdresses and masks. Many examples of Seaweed’s iconic work entered private collections and museums in the United States, Canada, and Europe this way during the 1950s.

For more information on the incredible artistry of Willie Seaweed, see Holm’s monograph Smoky-Top: The Art and Times of Willie Seaweed. Published in 1983, it remains the definitive study on the Kwakwaka'wakw carver and the nearly 150 carvings attributed to him. For additional historical information on the Kwakwaka'wakw, the government’s ban of their potlatch, and issues related to their cultural heritage, see Douglas Cole’s Captured Heritage: The Scramble for Northwest Coast Artifacts (1995).

Witnesses
Arts of the Americas and Pacific Northwest