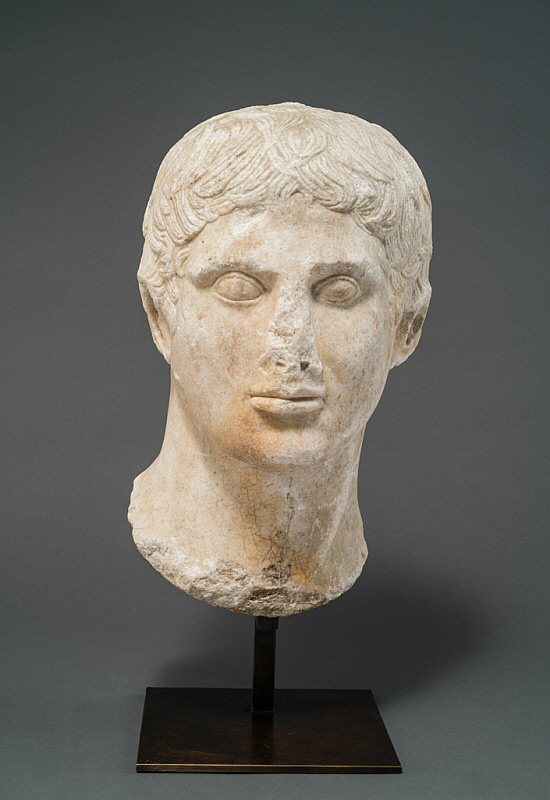 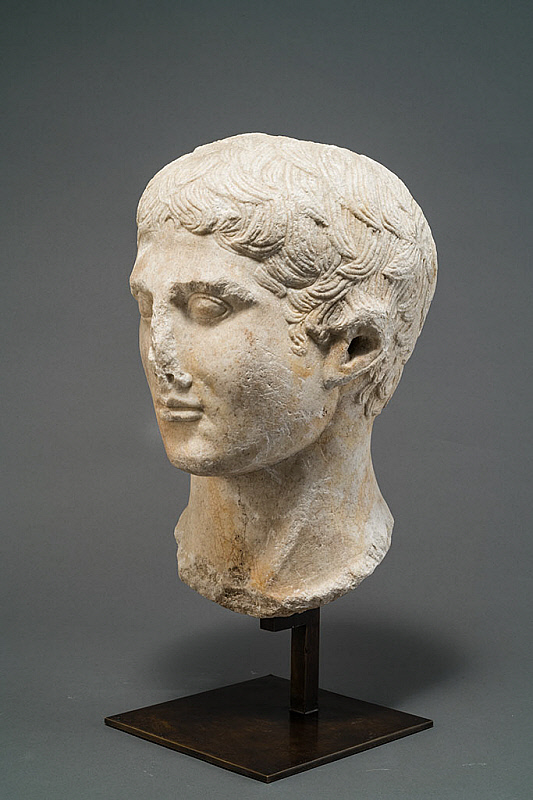 This marble head represents a young, beardless man with short, wavy hair and a small, flat mouth. As was often the case, the pupils may have been indicated with pigment when it was crafted. Today, the nose is mostly missing, and there is minor damage at the mouth and the ears. The regular nature of the break at the figure’s neck suggests that the head may have been set onto a bust or full-sized body as a separate piece. It’s also possible that it reflects collecting preferences popular through the early 20th century, which showed a preference for standalone heads as opposed to full-bodied sculptures.

This fragment was found in the 1920s on a hillside near the Roman amphitheater of Saintes, France, which was the capital of Gallia Aquitania, a province of the ancient Roman empire. The remains of several Roman houses have been identified near the amphitheater. The style of the head reflects the enduring influence of Greek sculpture, particularly the work of sculptor Polykleitos, who was active hundreds of years before in the 5th century BCE. Specifically, the short hair with stylized locks and the propensity of a figure to gaze slightly to one side recall works of art by the sculptor, which are now lost and only known through hundreds of copies of key works: the “Diskobolos” (discus-thrower), the “Doryphoros” (spear-bearer), and a representation of the Greek god Hermes. During the Roman period, Greek sculptures were popular objects to be imported then copied in other media and emulated in the creation of new sculptures in order to decorate homes and gardens. This work of art is likely one of those emulations as it combines elements of Classical Greek (480–323 BCE) sculpture with stylistic preferences of Roman Gallic art, including the flattening of the locks of hair, heavy lidded eyes, and prominent eyebrow ridges. This sculpture may have adorned a Roman house in the interior courtyard or in the gardens.