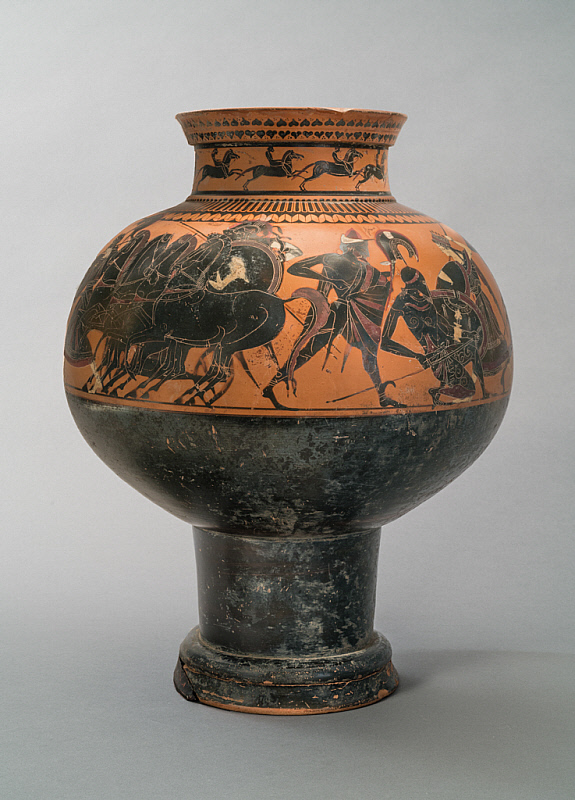 Psykters were only produced for a short time in the late Greek Archaic period, towards the end of the 6th century through the mid-5th century BCE. The shape is thought to have been used as a cooler for wine that perhaps would have held ice or chilled water. It would then float in a larger vessel, such as a krater (mixing vessel). Alternatively, it may have held wine and been placed in a vessel packed with snow or ice. The imagery on the body of the vase would be visible as it floated, revealed and obscured as the liquid moved.

This vase is notable for several reasons: it was made of two separate pieces that were later joined, it is larger than other examples, and it has an unusual double foot. Although only 60 other psykters are known today, the shape appears in some representations of the Greek drinking party, the symposium. This object is signed by the potter Nikosthenes (active 550–510/505 BCE), but not by the painter. Thus, the identification of the painter relies upon scholars who identify unsigned works through careful stylistic analysis of ancient artists (known as connoisseurship). The vase has been attributed to different vase-painters over the years, beginning with the so-called “N Painter,” who may have been Nikosthenes himself. With further study, this attribution was changed by Dietrich von Bothmer to the Antimenes Painter. Yet other scholars have continued to find that identification unsatisfactory and research continues.

There are two registers of figural imagery on the vase. The first is a line of horseback riders around the neck that may represent a race: the horses are in motion with both front legs raised as if in a full gallop, which would be emphasized by the movement of the psykter itself. The second register is on the main body of the vase, showing the mythological battle of the giants and the gods (known as a gigantomachy), a subject that was particularly popular in the Archaic period (600–480 BCE). Each of the four giants has fallen to one or both knees, which allows them to fit within the frame despite their large size and visually indicates their defeat. Each giant is dressed as a Greek hoplite (a heavily armed soldier), with shield, crested helmet, breastplate, and greaves as they fight against three goddesses and four gods. Additionally, two of the deities attack in horse-drawn chariots.

The goddesses, highlighted by the added white for their skin, wear dresses while the gods have a mix of attire, including the Greek hoplite panoply, traveler’s cloak, or an animal skin. Hermes is identifiable by his winged shoes and pointed cap. Hera, the queen of the Olympians, wears a crown, sometimes known as a polos. The snake-headed aegis (cloak) is worn by Athena, who drives one of the chariots. Dionysos—assisted by three small lions and a snake—wears a wreath and a knotted and belted panther skin, looking very similar to the hero Herakles in other images. Poseidon carries a trident and a large boulder known as Nisyros, a chunk of the island Kos, which Poseidon broke off during battle to crush a fleeing giant named Polybotes, who is the only giant whose name is known in this image (this particular mythological incident is mentioned by the ancient authors Apollodoros, Pausanias, and Strabo). The identities of two of the remaining deities are uncertain: possibly the goddess Aphrodite, wearing a helmet and fighting with a spear, and the god Ares as the other charioteer.