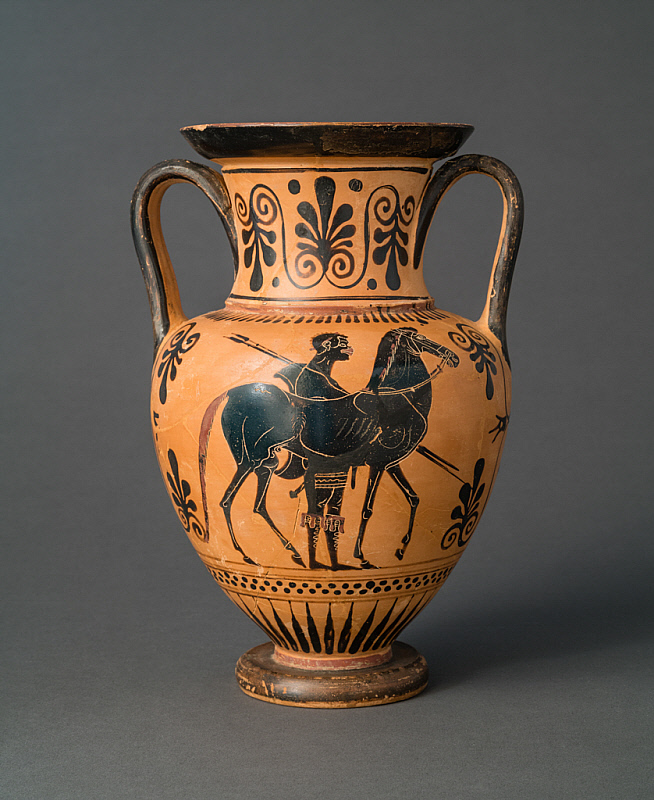 Created during the late 6th century BCE, this Archaic Period (600–480 BCE) amphora (storage jar) is attributed to the Dot-Band Class by the distinctive band of double dots below the figural panels. Rather than being attributable to a specific artist, the Dot-Band Class is a stylistic grouping proposed by scholars to help classify archaeological finds originally produced in Greece. This decorative theme may represent the production of a particular workshop in ancient Attica (the region around Athens) that was in operation possibly between 520–500 BCE. The vases in this group share similar proportions and decorative schema, including the palmettes on the neck and those framing the figural panels, a band of tongue-like decoration above the scenes, the strip of dots below the figures and above the upright rays around the foot of the vessel.

On this vase, one side features an armed Black African man next to a bridled horse. He wears a long tunic (chitoniskos) with a patterned edge and tall tasseled boots (possibly embades, a type of enclosed boot). He carries two spears, a half-moon shield called a pelta on his left arm, and he appears to have a sword hilt at his waist as well. While there are depictions of Greek warriors with these shields, they are more often carried by non-Greeks in representations, including Thracians, Scythians, Amazons, and satyrs, among others. Warriors carrying them can be referred to as peltasts, lightly armed mercenaries who typically used javelins or spears as their main weapon such as the one carried by the warrior depicted here. In the Archaic and Classical periods, foreign mercenaries were common in Greek warfare. The ethnicity of this figure is emphasized in the caricaturized depiction of the hair, lips, and nose, similar to other depictions of Black Africans (such as Nubians, Egyptians, and well-known figures like Memnon, the Ethiopian king in Greek mythology who fought at Troy) in other images in Greek art. His identity, however, is not fully clear from the image. While he carries weapons for battle, he does not wear armor and appears to be waiting. Alternatively, this figure could be interpreted as a squire or attendant because of his stance next to the horse. Another vase in the Menil Collection similarly depicts a Black African peltast without armor, but he is in motion with his weapon lowered (object 1987-05 DJ).

The figural panel on the other side of the amphora shows a mythological contest known as the struggle for the Tripod of Delphi between the Greek hero Herakles and the god Apollo. In this image, Herakles appears as a nude, mature male figure with a beard. He raises his usual weapon, a knotted club, although his characteristic lion skin (which can be seen on another amphora in the Menil Collection, object 1965-27 DJ) is absent. The winged shoes, bow with quiver, and long hair help the viewer recognize his opponent as Apollo. A tripod is a three-legged support typically for a shallow bowl that could serve as a divinely-inspired seat for an oracle or with a cauldron and ring handles. These objects are commonly found as votive gifts at sanctuaries, could be used as trophies or prizes, and had religious significance. At Delphi, the tripod was the seat of the Pythia, the oracular priestess of Apollo, and was a particularly sacred artifact. In the myth, Herakles, tries to steal the tripod after receiving an unsatisfactory response from the Pythia, but Apollo arrives to stop him. After Zeus intervenes in the contest between the two half-brothers, they reach a compromise. Apollo is allowed to keep the tripod, but he must give Herakles clear instructions on how to atone for a murder, which is that Herakles must sell himself into slavery for period of time.