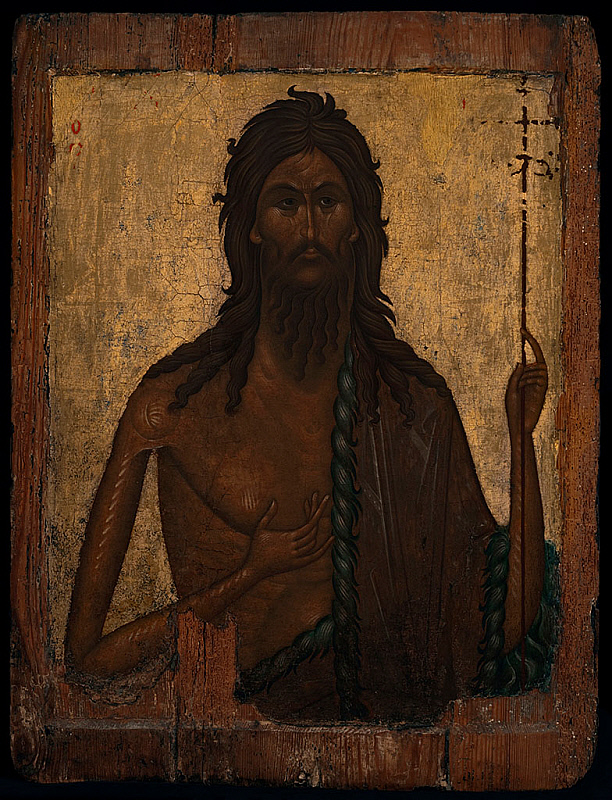 Forerunner, relative, and friend of Jesus Christ, John the Baptist was venerated as a great ascetic and, other than Mary, the first human to recognize Christ’s divinity; he was later held to be the saint most able to intercede with Christ on behalf of devotees. Here, John the Baptist is facing the viewer and summoning him or her to repent, an illustrative type that gained currency during the Palaiologan period (1261–1453) in Byzantium. The figure’s angular, thin arms and camel hair robe convey the saint’s poverty and his strict adherence to austerity. In his left hand he holds a staff with a cross, which proclaims his dedication to Jesus Christ and announces his own martyrdom, for John prefigured Jesus not only in his preaching but also in his death. John the Baptist icons, particularly of this size, most often originated in large Byzantine monasteries. That they are associated with such settings is no accident: Byzantine monks looked to John the Baptist’s life as a model for their own, and his presence was a pervasive summons to monastic discipline.

At some point in the 18th or 19th century, a new layer of gold leaf was applied to the panel. Traces of blue pigment indicate that, after its re-gilding, the icon had a blue background that was subsequently removed.