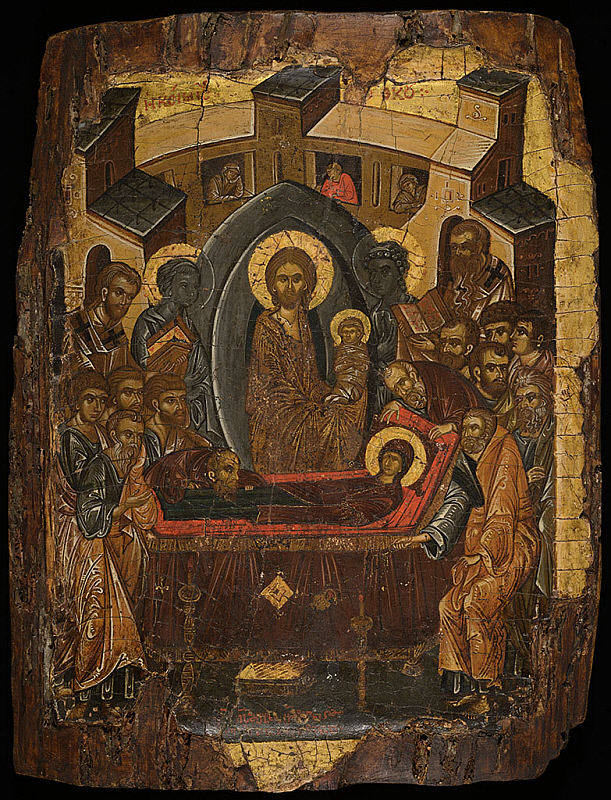 As the exemplary image of the good Christian death, the Koimesis (the death of the Virgin Mary and her assumption into heaven) has played a powerful role in personal devotion since its emergence in the 10th century. The densely grouped figures in the foreground assume long-established positions. Christ stands over his mother’s body, bearing her swaddled soul; Peter swings a censer; John stands at Mary’s head; and Paul touches her legs. In contrast, the curving wall behind them, the mourners who gaze from it, the grisaille angels in the mandorla of Christ, and the hierarchs with their open books belong to a specific tradition that emerged in Constantinople in the 14th and early 15th centuries. Though this icon’s wood is severely worm damaged, its image remains largely intact, painted on a thick layer of gesso without underlying canvas.

The painter of this icon restricted his palette to a narrow range of brown and yellow earth tones in which charcoal gray takes the place of blue. His composition is strong and stark; abstaining from elaboration, he bound the scene in one climactic “X” with Christ at the center. The high vantage point, sweeping curvature of the wall in the background, and converging diagonals of buildings and coffin create a lively interplay between three-dimensional depth and surface pattern. The painting’s depiction of physical and spatial structure suggests a date in the 15th century. Its inscription, written in Greek in red majuscules indicates that the icon originated in a Greek-speaking area. The details within the figures—the drapery folds outlined with white highlights and the limbs punctuated with dots of light—resemble early 16th-century icons attributed to painters from Kastoria, in the Macedonian region of present-day Greece.