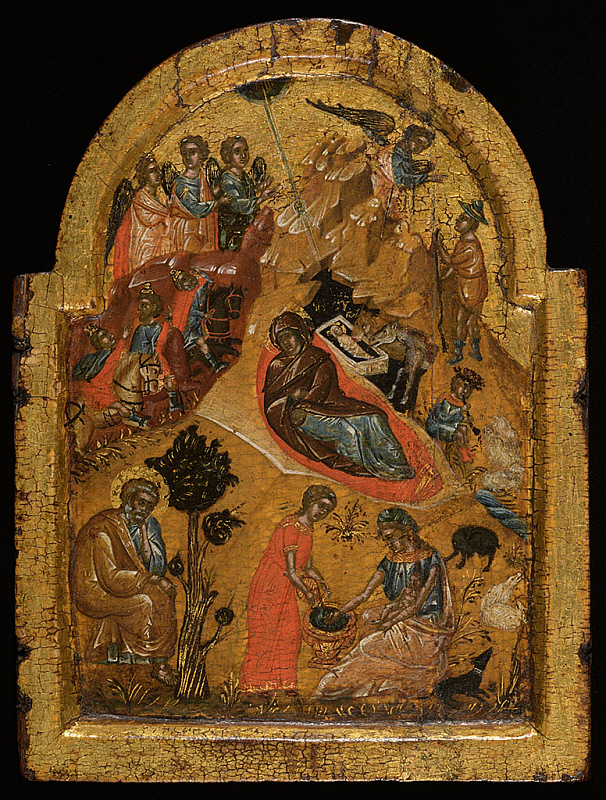 Once the centerpiece of a portable triptych, this small image of the Nativity includes a multitude of detail despite its diminutive size of just over seven by five inches. Mary, resting in a brilliant vermillion blanket with gold embroidery, occupies the center, with the infant Christ above her, kept warm by a donkey and an ox. A reed piper plays at her foot. In the panel’s top right, an angel announces the divine birth to a shepherd, accompanied by a heavenly host at top left. Below the angels, the Magi arrive on horseback bearing gifts for the newborn Christ. Beneath Mary are her midwives, one pouring the water of her bath, the other testing its warmth, while a black dog frolics nearby. In contrast to this lively group, Joseph sits alone, appearing contemplative beneath a tree, with Mary’s gaze directed toward him.

This combination of motifs, drawn from both Biblical and extra-Biblical sources, follows the medieval tradition of compressing events disparate in time and space into a single scene. The composition was developed in the late 14th century in Constantinople (present-day Istanbul) as artists drew upon Italian Renaissance enthusiasm for naturalistic details and was later adopted in Venetian-ruled Crete. This icon once belonged to Sir Kenneth Clark, the British art historian and former director of the National Gallery, London.