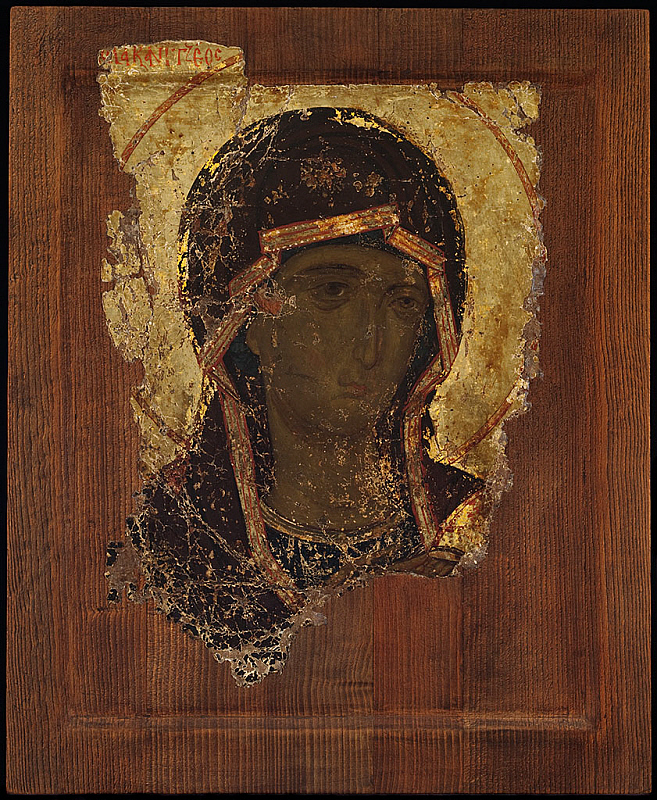 Though Byzantine art is often described as linear, it relies less on line than on the painterly interplay of light and color to shape its forms. In the figure’s face especially, successive layers of paler tones were brushed over a warm, dark coat of olive or brown, creating the forms by grazing their crests with touches of light-colored paint. When these lighter layers are abraded, as they have been in this image of Mary (mother of Jesus Christ), what remains are traces of finely modulated planes. The face was once delicately rounded, as evidenced by the soft pink of Mary’s cheeks, the plumpness around the lips, the flush of light over the cheekbones, and the glint of light in the eyes. Mary’s bowed lips, the fullness of her cheeks, her large, almond-shaped eyes with their long upper lids, and the use of color as well as shadow to create depth, are characteristics that suggest a date in the final third of the thirteenth century when Byzantine painters returned to the Hellenistic roots of their painting tradition after the recapture of Constantinople from the Crusaders in 1261.

Mother of God was reported to have been half of a double-sided icon, originally paired with the Menil’s Archangels Gabriel and Michael on its opposite side. This fragmentary image was removed from its original wooden panel around the 1970s and affixed to a modern one by conservator Stavros Michalarias, who also cleaned it of overpainting, soot, and varnish, and tinted the damaged areas, especially the nose. The gold edging on the Virgin’s head cloth (or maphorion) may not be original, as there are lines of a different kind below it.  The incompletely preserved, inscription in red “…olakanitzeos” is not part of any recognizable word and was likely added many years after its making, possibly to record the name of a donor or place.