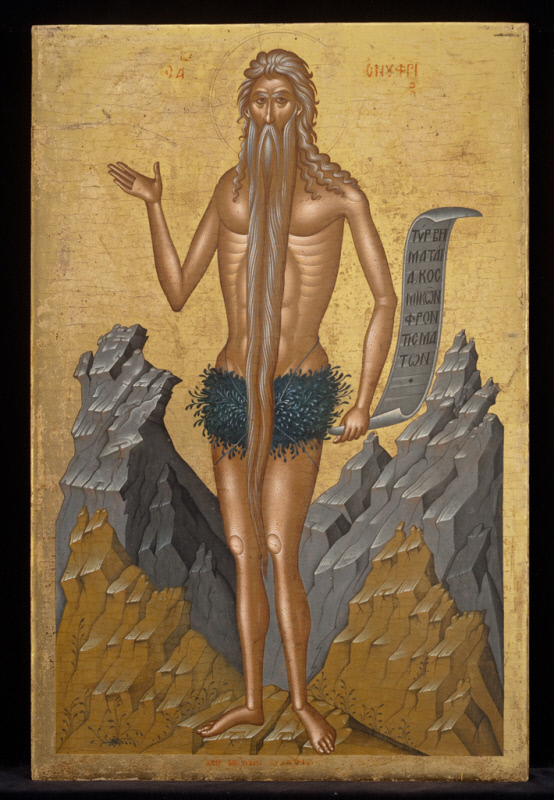 Onouphrios was a 4th-century Egyptian who spent 60 years in the desert in an ascetic retreat so extreme that he was clothed only in his own hair when a wandering monk named Paphnoutios encountered him.1 The monk listened to Onouphrios’s account of his experiences, buried him when he died, and wrote his “Life,” a biography vague in detail but stirring in its depiction of asceticism. Evolving from Paphnoutios’s work, it became customary to portray Onouphrios standing in the wilderness, wraith-thin and radiantly naked but for his prodigious beard.2

This compelling example is labeled Ὁ Ἅγιος Ὀνούφριος (Saint Onouphrios) in red majuscules; his scroll is inscribed with black characters reading τύρβη ματαία κοσμικῶν φροντισμάτων (vain tumult of worldly affairs). The icon is expertly painted, and the gesso covers all sides to protect against deformations. The signature at the bottom of the frame reads Χεὶρ Ἐμμανουὴλ τοῦ Λαμπάρδου (Hand of Emmanuel Lambardos). The name could refer either of two members of the Lambardos family of icon painters in Iraklion, Crete; two named Emmanuel were active during the same period (ca. 1593–1647) and their work has not yet been differentiated.3

Lambardos’s portrayal of Onouphrios exhibits two unusual characteristics that give it historical context. The apron of foliage tied with a brisk “X” of vine across his groin, for one, became customary in Cretan imagery after its use by the great 15th-century Cretan painter, Andreas Ritzos.4 Lambardos’s own fascinating translation of the naked Onouphrios into a holy nude, in accord with Counter-Reformation heroic sanctity, is significant as well. His saint is lean but in no way insubstantial. The meticulously depicted mountains to either side of Onouphrios frame his form; against their sharp angles, his limbs swell in long, elastic curves. His flesh is warm in tone and adorned by fine lines of light, as though he had been bathed in the pure gold of the desert. This light pushes shadow to the very edges of his limbs, emphasizing the muscular rise and fall of their contours. His beard is completely undisturbed by wind, and the same breathless air suspends his scroll in a perfect demonstration of three-dimensional representation. The raised right hand is poised between invocation and admonition as he conveys the prayers of devotees to God while warning them against worldly distractions.

This icon is a potent testimony to the ability of Cretan painters to integrate iconic tradition and the artistic and spiritual sensibilities of early modern Europe. The Lambardos family were prolific painters represented in many monastic and museum collections, and they moved with ease in both art worlds, in some cases adopting an almost purely European manner, in others adhering fully to iconic tradition. In this and a few other rare works, the two styles are blended with an astonishingly seamless finesse.5

4. It appears on the figure of the Onouphrios in the frame of his icon of the Ascension in the Museum of Western Art, Tokyo: see Maria Vassilaki, ed., The Hand of Angelos: An Icon Painter in Venetian Crete (Athens: Benaki Museum, 2010), 205–07, cat. no. 51.

Experiments with Truth: Gandhi and Images of Nonviolence