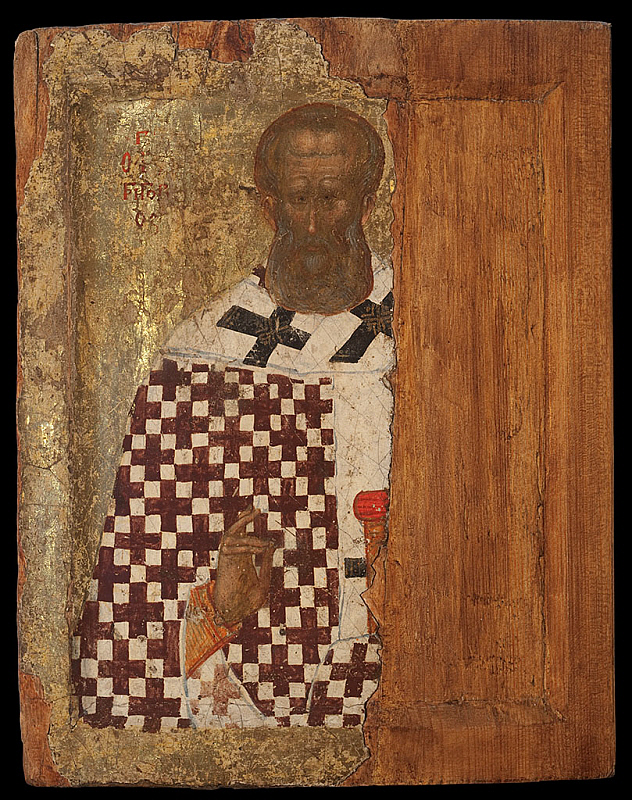 The modest size of this panel (approximately 9 x 7 inches) implies that it was a private devotional icon, meant for use in the home rather than in a public setting. The figure can be identified as a bishop by his ecclesiastical garments, including a gold-embroidered omophorion (shawl) and an elaborate, cross-studded robe known as a polystavrion. In one hand he holds a large book (only the edge of which is still visible), a sign of his authority to transmit the will of God. Although a red inscription labels the figure “Saint Gregory,” the extensive losses on the right side of the panel make it impossible to know which Gregory is represented. The most famous saint with this name is Gregory the Theologian from Nazianzus, an ancient town in present-day Turkey, who was venerated as one of Orthodoxy’s greatest fathers. The figure’s thick, broad beard resembles the style of beard found in depictions of Gregory of Nazianzus. However, given that it is dark rather than gray suggests the figure may represent Gregory Palamas. A scholar, mystic, monk, and archbishop of the northern Greek city of Thessaloniki, Palamas was canonized in 1368 and widely depicted in icons from northern Greece and Mount Athos thereafter.