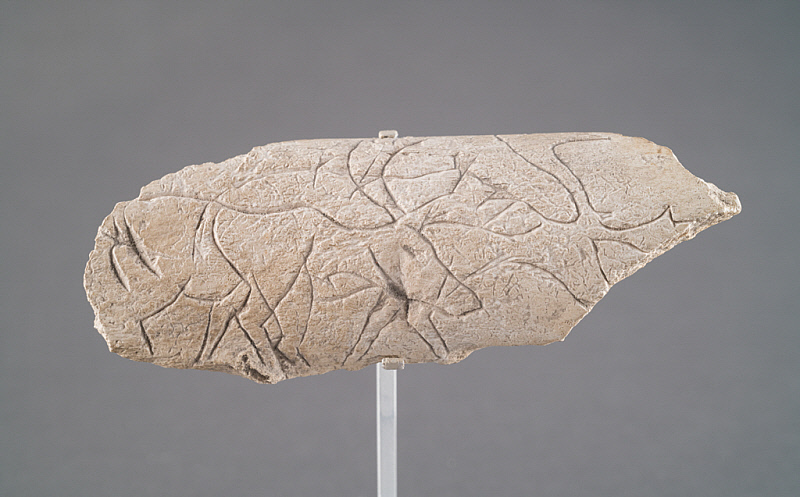 One of the oldest works at the Menil Collection, this small fragment is incised with layered and overlapping naturalistic representations of reindeer. It is one of three such fragments in the museum’s holdings attributed to the Western European Upper Paleolithic period (+/- 17,000–11,000 BP, or Before Present), which is associated with numerous archaeological sites in France, Spain, Germany, and other neighboring countries. These sites were typically temporary or semipermanent rock cave shelters that provided safety for small groups of early humans. They were locations around which they could hunt migratory animals, gather other types of food, and possibly even engage in advantageous agriculture. Acquired in 1966, this example does not have an archaeological context or recorded findspot. Small fragments are by nature highly mobile, and since the mid-19th century, collectors routinely exchanged and sold specimens like this one. It reportedly came from France, and the engraved imagery can be stylistically associated with the Franco-Cantabrian region. Archaeological evidence indicates reindeer (Rangifer tarandus) were incredibly abundant in this region during the Upper Paleolithic. They were a vital source of food and material resources; their antlers and bones could be fashioned into tools, weapons, and other types of prestige objects. Not enough material of the fragment remains to determine its original use, but the engraved imagery demonstrates the artistry of early humans as well as their symbiotic, spiritual relationship with animals and the land.