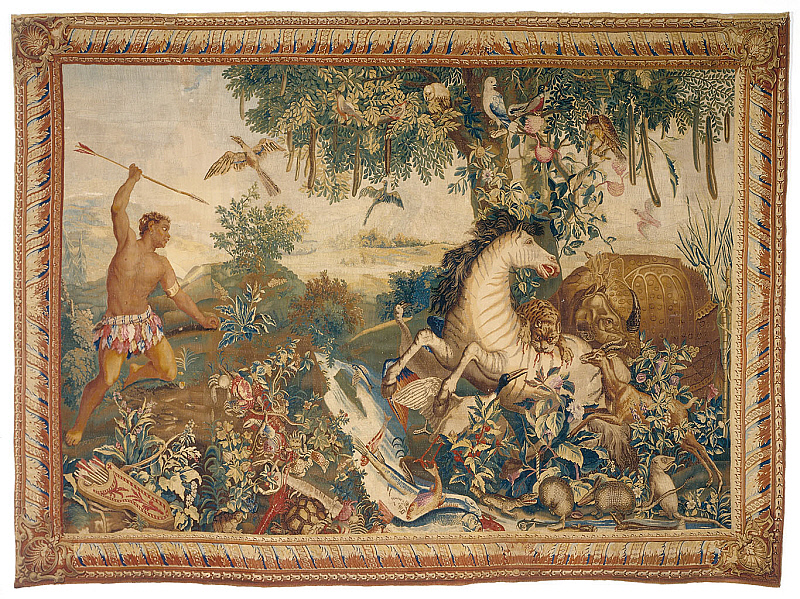 The Striped Horse was woven at the Gobelins Manufactory in Paris, the official supplier of tapestries to the French monarchy starting in 1663 and which continues to operate today under the French Ministry of Culture. Based on cartoons (full-sized paintings or drawings used as preliminary designs) by Dutch artists Albert Eckhout and Frans Post, the hanging is from “The Old Indies” series, which depicted the flora, fauna, indigenous populations, and African slaves that inhabited the Dutch-controlled territories of Brazil in the 17th century considered part of the West Indies at the time. Beneath the pendulous seed pods of a Cassia grandis tree, a jaguar sinks his teeth and claws into the back of a zebra, the striped horse named in the title. Behind these animals and to the right stands a rhinoceros based on a 15th-century woodcut by the German Renaissance artist Albrecht Dürer. At the composition’s left edge, an indigenous man wearing a feathered skirt and gold armband aims a spear at this central group. Varieties of fish, crustaceans, reptiles, and small mammals are arrayed in the foreground; several birds, including a hawk and an owl, occupy the tree’s branches. In this era, images of animal combat illustrated the wildness and savagery that the European imagination associated with the New World. The fascinating combination of accurately observed wildlife with the clumsily executed rhinoceros and zebra—animals foreign to the Americas—heightens the curiosity of the encounter.