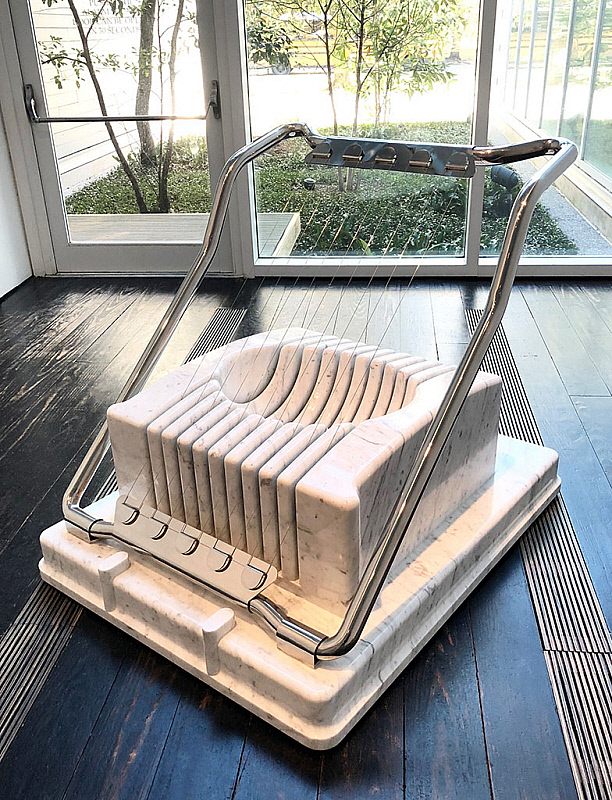 In Marble Slicer, 2002, Mona Hatoum (b. 1952) distorts the scale of a kitchen object. Designed to cradle and cut a hard-boiled egg, the ordinary egg slicer becomes sinister, even threatening, when enlarged to these preposterous dimensions. The artist, confirming this impression, has stated that the indentation in the marble bed is intended to correspond to the size and shape of a small child in a fetal position. The work intimates a harsh relationship with the viewer’s body, while also drawing attention to the way that commonplace objects contain the potential to ignite a sense of the uncanny. As theorized by Sigmund Freud, the uncanny describes a phenomenon in which something is simultaneously foreign and familiar, evoking a sense of discomfort and even terror. Beginning in the 1920s, the Surrealists embraced this concept as a tool to transform the everyday with nuanced and playful interventions. In Hatoum’s hands, though, the uncanny becomes a way to investigate contemporary conditions of political displacement and exile.

Marble Slicer further exemplifies Hatoum’s recurrent interest in the idea of home—an idea intimately connected to the uncanny, for the German word, unheimlich, literally means “not-at-home.” Much like her Surrealist predecessors, Hatoum sees the power in subverting everyday things in order to draw attention to the world’s instabilities. Scale plays an important role in this process. Hatoum frequently takes domestic objects and transforms them into outsized, sometimes dangerous sculptures that nevertheless retain a kinship with their original, commonplace referent, from egg slicers and food mills to cheese graters and meat grinders. According to the artist in a 1998 interview, “In a very general sense I want to create a situation where reality itself becomes a questionable point, where [people] have to reassess their assumptions and their relationships to things around them.”

Born to a Palestinian family in Beirut, Hatoum was in London on a short visit in 1975 when civil war broke out in Lebanon. Unable to return home, she stayed in London, where she continues to live and work. She attended the Byam Shaw School of Art and the Slade School of Fine Art in London. At the beginning of her career in the 1980s, Hatoum created video and performance work focused on her body. In the late 1980s, her practice shifted to large-scale sculptures and installations that engage the body of the viewer.