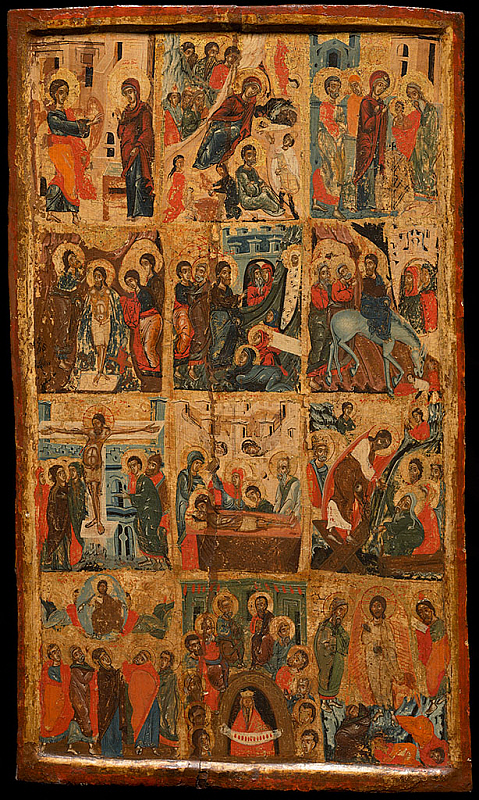 This icon portrays twelve scenes from the life of Christ that were celebrated with feasts in the liturgical year: the Annunciation, Nativity, Presentation in the Temple, Baptism, Raising of Lazarus, Entry into Jerusalem, Crucifixion, Lamentation, Anastasis (another word for the Resurrection of Christ), Ascension, Pentecost, and Transfiguration. Such assemblages of major feast scenes, generically known as the Dodekaorton, or twelve-feast cycle, were developed in the 11th century and became a perennial staple of Orthodox imagery. Despite the name, the number and selection of depicted scenes varies, as seen here in the inclusion of the Lamentation, which is not a canonical feast, and the omission of the Koimesis of the Mother of God (the death of the Virgin Mary and her assumption into heaven), which is a major one. What establishes the Dodekaorton’s identity is the readily recognizable, recurrent majority of scenes.

The Dodekaorton served two dominant purposes: to connect the life of Christ with the circuit of the liturgical year and thus to the rhythm of time in Christian communities and to offer his life as a devotional model for worshippers. A panel such as this allowed the cycle’s contemplation as a whole. The scenes are generally in biographical order, but there are no definitive sequence as theological or liturgical ideas could affect their location. For example, the placement of the Transfiguration at the end here reflects its celebration in August, the last month of the Byzantine civic year.