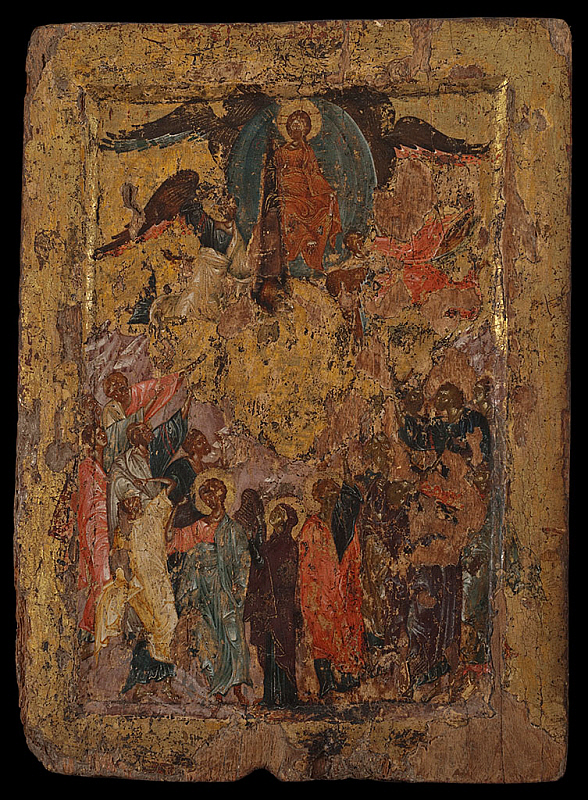 Beginning in the late 4th century, the ascension of Christ into heaven was celebrated as an independent feast day on the sixth Thursday after Easter. The depiction of the event here follows standard Byzantine iconography: at the top of the panel, Christ is seated in a mandorla, an elongated oval enclosing holy figures in medieval art, supported by angels. Directly below him stands Mary with her face and hands raised. On either side of her are two groups of Christ’s faithful disciples, who, like Mary, gaze and gesture toward heaven. This icon’s size suggests that at one point it belonged to a Dodekaorton, a series of icons illustrating events from Christ’s life and displayed in a templon, the structure that separated the nave from the altar in a Byzantine church. The triangular brown mark that starts at Christ’s foot and obscures part of his body is a candle smudge that indicates that the painting was later used for private devotion. Despite its extremely worn state, the icon’s subtle, radiant colors and lively, expressive figures remain an outstanding example of the style of painting associated with the Palaiologan Renaissance in the early 14th century. During this vibrant period following the destruction caused during the Crusades, Byzantine emperors attempted to restore Constantinople (now Istanbul) to its former glory by encouraging art, philosophy, and education.