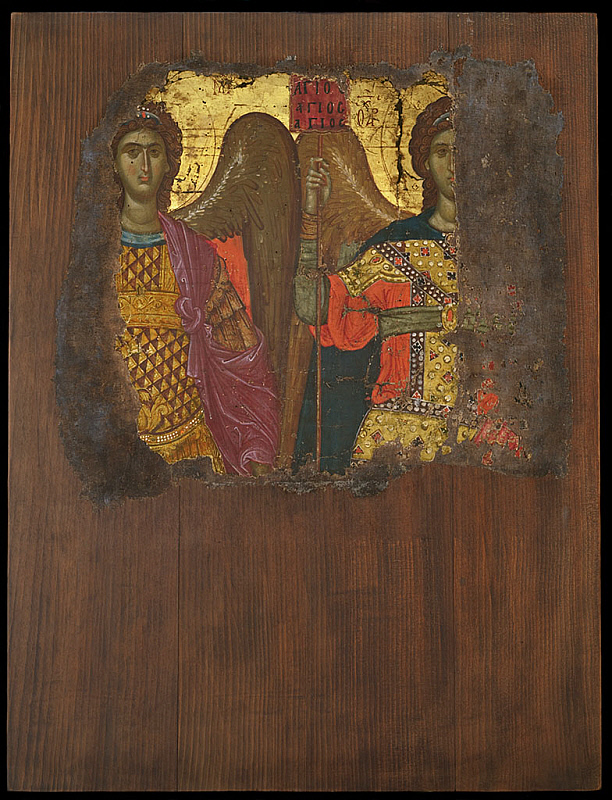 On the left, the Archangel Michael may be recognized by the partial Greek inscription in vermillion “[Archangel] Mi[chael]” above his wing, while Archangel Gabriel can be identified by a fragment of lettering that reads “Arch[angel Gabriel].” The figures’ solemn, impassive expressions indicate their divine essence, removed from the turmoil of human emotion. Both Michael and Gabriel are sumptuously clothed. Michael wears the gilded breastplate and purple chlamys (military cloak) of a Byzantine general, appropriate for his role as the commander of the celestial army. Gabriel is dressed in the ceremonial attire of a high-ranking dignitary, his tunic studded with colorful gems. He holds a banner inscribed “Holy, Holy, Holy,” the opening lines of the Trisagion. A standard hymn in Eastern Orthodox liturgy, the Trisagion, through its triple utterance, evokes the sacred unity of the Holy Christian Trinity– Father, Son, and Holy Spirit.

Archangels Michael and Gabriel was reported to have once been half of a double-sided icon, originally paired on the same support with the Menil’s Mother of God on the opposite side. The fragment was removed from its original wooden panel and affixed to a modern one some fifteen years before its acquisition by the Menil Foundation in 1985. Remarkably, this icon exhibits no evidence of in-painting or retouching and even retains traces of its original varnish.