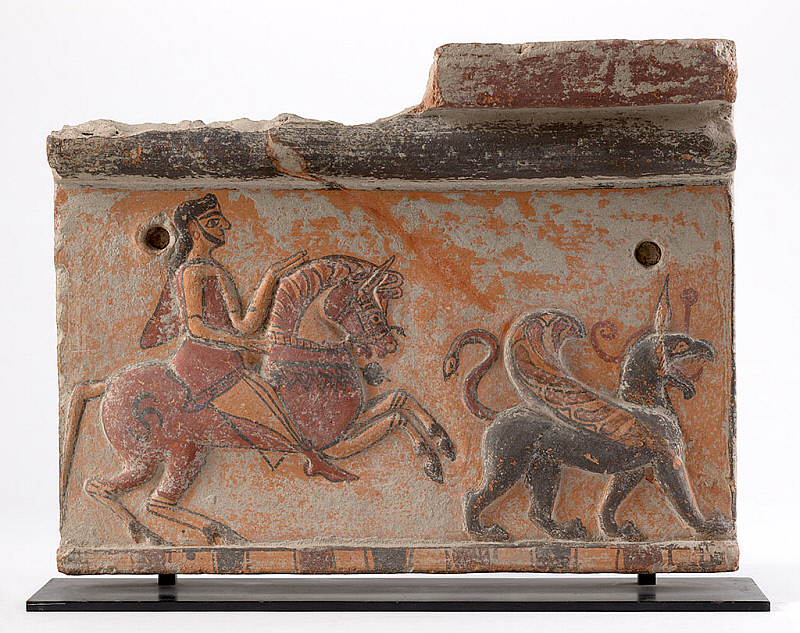 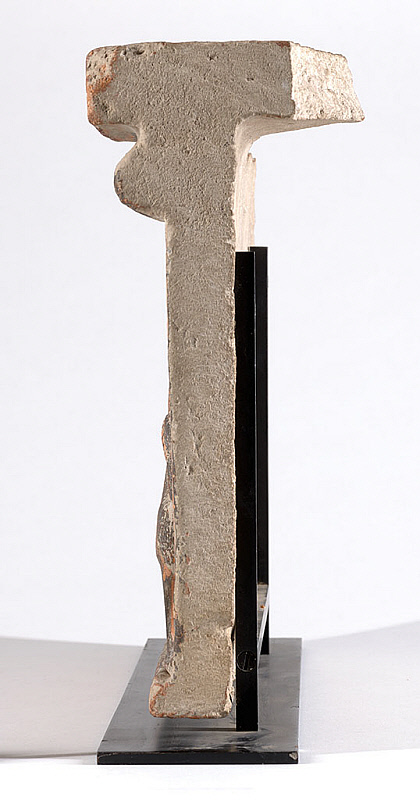 This architectural terracotta once functioned as a revetment, or a facing-piece that acted as a transition to the roof. It belonged to the same 6th century BCE building as another example in the Menil’s collection (1965-21 DJ), which possibly were created from same mold. Two peg holes visible today indicate how it would have been secured to the wooden superstructure of the building. Both this piece and 1965-21 DJ show a rearing horse mounted by a single male rider following a striding griffin. Details of the horse, rider, and griffin were added in paint.

The rider sits steadily on the back of the horse with his legs straight. With his right hand, the rider holds the reins and with his left he pats the top of the horse’s head behind the ears. His hair is gathered in a single braid down the back of his neck; he has large eyes, bushy eyebrows, and a short, strap-like black beard. He wears a tunic with short sleeves, a red cape, translucent wide-leg trousers that end above the ankles, and boots that may have been part of a regional costume. The body of the horse is red with cream-colored legs. The horse wears a saddle, bridle, elaborate reins, bands at the joints for the front knees and back hocks, and a pomegranate-shaped bell at the front of the chest piece. On the right hind flank of the horse, there is a black triskeles (a symbol of three legs joined in a pinwheel) brand. The elaborate adornment of the horse and distinct attire of the man may indicate that he represents someone with elite status.

The griffin, with eagle head, wings, and lion body, faces the same direction as the horse and rider. The griffin strides forward, with a long, upright ear, open beak with tongue extended, tail upright, and wings curling upwards. The details of the figures are defined with added red, black, and cream pigments. The paint also indicates elements that are not present in the plastic/molded decoration, such as the red top knot in front of the ears and a red spiral plume emerging along the back of the head of the griffin.