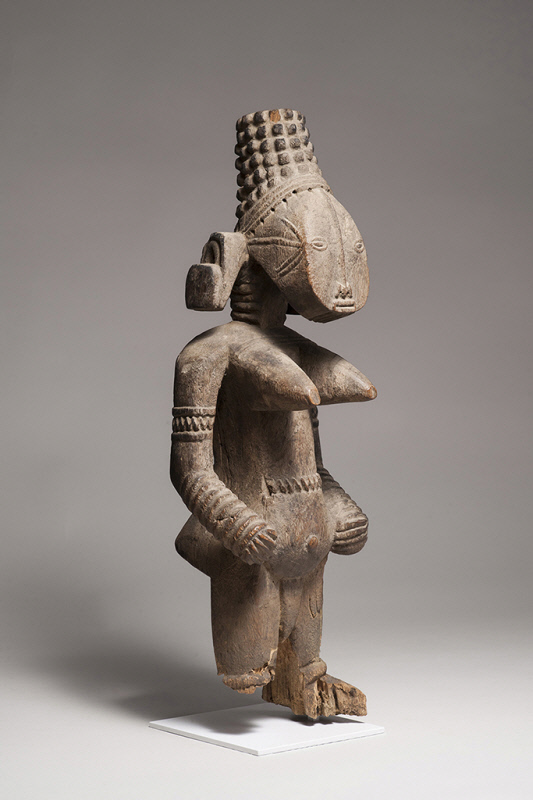 This excellent example of the figurative sculpture found among the Jukun-speaking peoples of northeastern Nigeria has been identified with other sculptures that the renowned art historian Arnold Rubin photographed in the field from 1964 to 1966. It resembles those of the subgroup called “Wurbo” after the town of Wurbon Daudu. Most Wurbo examples have faces with a pronounced overhang, rather rudimentary features, strikingly distended earlobes sometimes filled with earplugs, a multipart plaited beard, and tall conical head crests, often with elaborate relief carving. The bodies tend to be simply rendered, with conical breasts for the female figure, arms curving forward, hands deeply carved to suggest fingers, and rudimentary legs and feet.1

This sculpture shares most of these salient features, but its face and body are rendered with a distinctive fullness and attention to detail that makes it unusual among documented pieces. This is true of the elaborately carved rings around the neck, the ornamentation on the lower arms, and the references to scarification markings on the face, waist, and possibly the upper arms. On the other hand, the chin lacks the notable plaited beard elements found on most other Wurbo sculptures, male and female. Its patina and accompanying collection notes may date it to the late 19th century, making it among the oldest documented Wurbo sculptures, one possible reason for its uniqueness. Another early stylistically related example was given to the British Museum, London, in 1909,2 and since 1970 several others have been identified, including one fine example in the Virginia Museum of Fine Arts, Richmond.3

The Wurbo sculptures incarnate the spirit-principles associated with a healing complex called Mam, which is found among a number of Jukun subgroups. The Mam spirits are called upon for individual healing and community protection, especially in the event of epidemics, droughts, and warfare. While Rubin does not detail how the figures from Wurbon Daudu are used in Mam observances, he does report that related figures among the Northeastern Jukun at Kona are removed from their shrines during ceremonies and taken around to the houses of elders.4 He also notes that as individuals are being cured, they become possessed by a Mam spirit and may practice auto-mutilation by cutting their upper arms.5 The patterned incisions around the upper arms of the Menil sculpture may be a reference to this practice.

A Rubin field photograph of related Wurbo figures shows them dressed in wrappers covering their lower bodies, explaining the rudimentary hands legs and feet. The tall crests are wrapped with headbands into which feathers are inserted, and beaded necklaces adorn the body. Distended earlobes, which are common to men and women through the Middle Benue, form one of the most startling and exaggerated features of Northeastern Jukun sculpture. Other details likely refer to aspects of royal dress and regalia, and the figures may commemorate and exhort the assistance of royal Jukun ancestors.