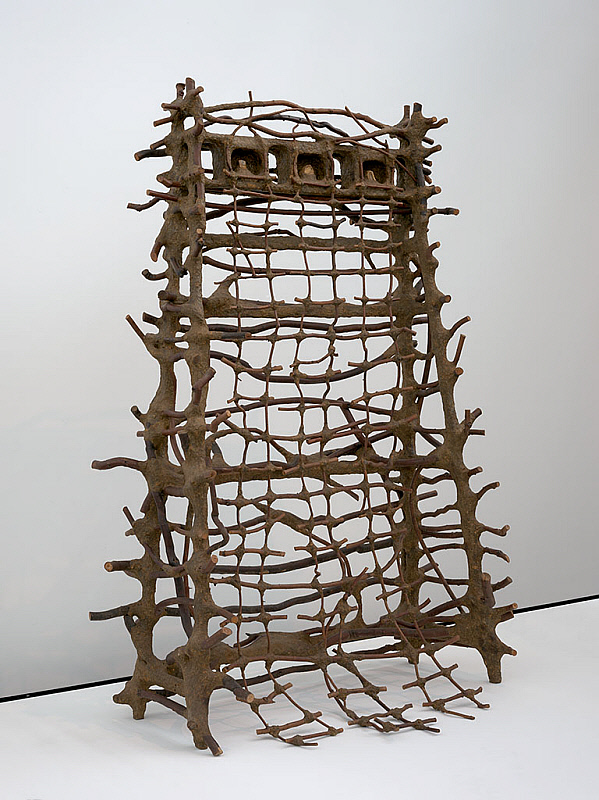 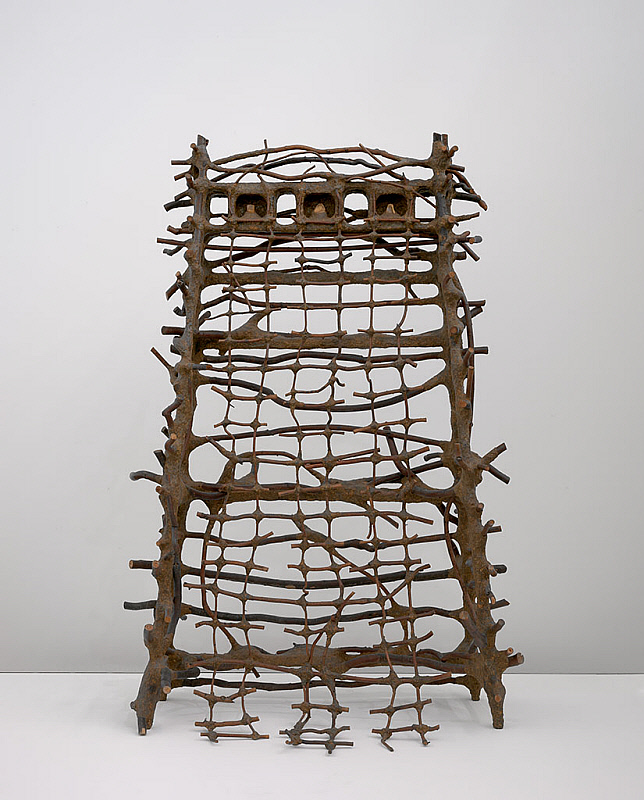 Clyde Connell’s Rain Place from 1978 incorporates an array of elements that the artist sourced from the bayous in Louisiana such as tree branches, swamp rattan, and smooth river stones, the latter of which are positioned like sacred relics above the cascading grid of found and cut sticks. The wooden armature is held together by a mixture of paper and glue, materials Connell combined together to resemble a wasp’s nest. In Connell’s hands, humble and organic materials form a powerful presence. Like a three-dimensional drawing in space, Rain Place is a striking interpretation of a Minimalist grid infused with the artist’s mystical view of nature.

Born in 1901 in Belcher, Louisiana, Clyde Connell (1901–1998) lived in the northwestern part of the state for her entire life, and it was only at the age of fifty-nine that she became a full-time artist. In the 1950s, Connell became a civil rights advocate and began traveling to New York City as a representative of her Presbyterian church. During her initial visit to the city in 1952 she encountered Abstract Expressionist paintings and was particularly influenced by Adolph Gottlieb’s pictographic forms. She would continue to make biannual trips to New York, where she became acquainted with the work of Eva Hesse in the late 1960s. Hesse’s use of unorthodox materials was a revelation for Connell. By this time, she had set up a studio at Lake Bistineau, near Shreveport, and she began to create sculptural work that responded to the modernist forms of her contemporaries while reflecting her natural environment by using materials from the surroundings, including sticks, stones, moss, rattan, red river mud, and discarded machine parts. The artist later recalled: “I began to think about people as being part of nature, part of an overall scheme of things. I began to think about everything, including my art.”

Although Connell lived in relative isolation in between her stays in New York, she found support for her work from other artists, joining a feminist art group, the Cotton Street Loft, in Shreveport in the late 1970s. It was during this decade that Connell received increasing attention for her work, and she begin exhibiting in New York in the 1980s. Rain Place, 1978, was included in her first solo exhibition outside Louisiana at the Tyler Museum of Art in Tyler, Texas, in 1979 and, later the same year, at the Lawndale Annex in Houston. Her work is included in the collections of the Metropolitan Museum of Art, New York; the New Orleans Museum of Art; and the Contemporary Austin – Laguna Gloria, among others.