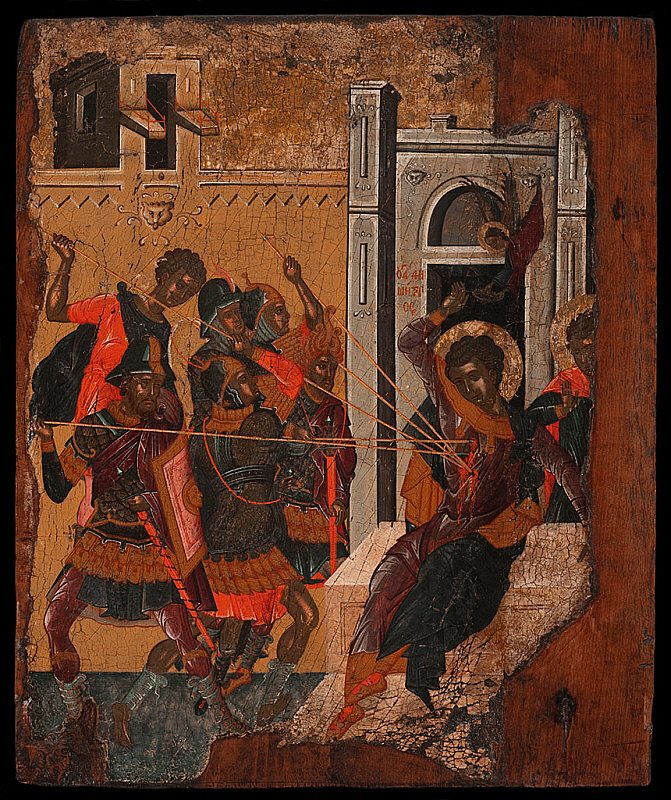 Identified here by a vermilion inscription, Saint Demetrios is known as the defender of Thessaloniki, present-day Greece’s second largest city and an important urban center for more than 3,000 years. Along with Saint George, Demetrios is one of the most widely venerated of the Orthodox military saints. Since the 5th century, his relics, which are famous for exuding holy oil, have been enshrined in a basilica in Thessaloniki dedicated to the saint, a frequent destination for pilgrimages. Demetrios was initially portrayed in court dress as a youthful martyr, but in the 10th century he assumed the armor of a warrior saint and has since been only sporadically shown in civilian attire, as he is here. He was martyred when he was stabbed to death on the orders of the early 4th-century Roman emperor Galerius (reigned 293–306 CE), who became enraged after his favorite gladiator was killed in the arena by a Christian whom Demetrios had blessed before combat.

This depiction of Demetrios’s death adheres to an elaborate version of the scene that portrays not one, but six executioners, five of whose blows land directly on his chest. To the right, his friend and fellow saint, Loupus, cringes and recoils from the violence. Above Demetrios’s head, an angel descends to place upon him the crown of martyrdom. This iconography first appears in the late 14th century and is reproduced faithfully on other Cretan icons ranging from the late 15th to the 17th centuries.