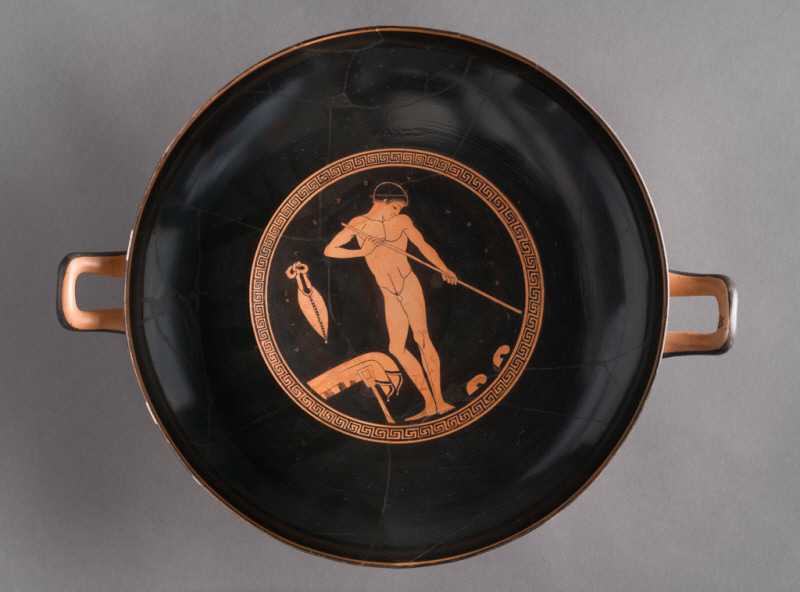 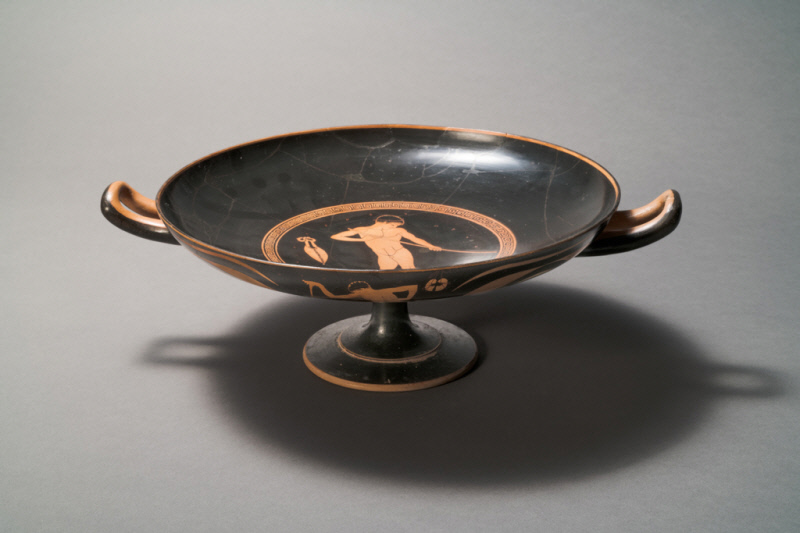 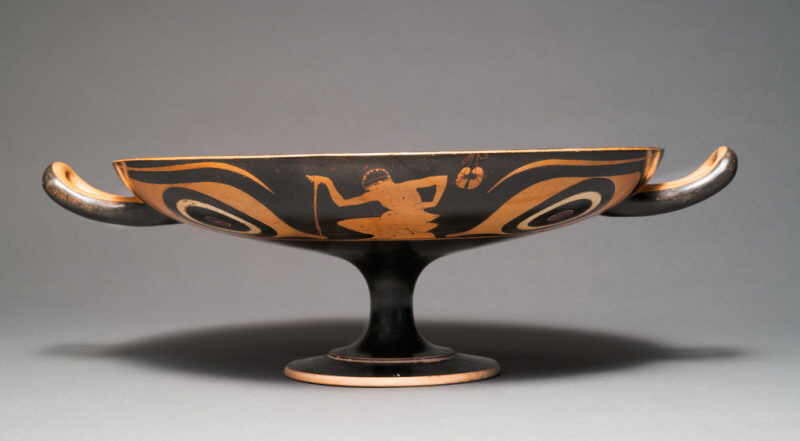 This red-figure cup (kylix, plural: kylikes) from the Greek Archaic period (600–480 BCE) features three images with a unified theme of the aristocratic, male youth. This particular piece is attributed to the Antiphon Painter, who was active between 500 and 475 BCE.

In the tondo, or painted medallion in the interior of the wide, shallow bowl, a young, male athlete prepares for activity in the nude surrounded by a meander border, which acts as a porthole-like window framing the scene. His cloak is discarded on the couch next to him, only partially visible, and his status as an athlete is emphasized by the other items around him: the hanging bag that may contain a discus, the pair of u-shaped jumping weights on the ground, and the javelin in his hand. These objects were all part of the equipment used in the pentathlon, which became part of part of the Olympics in as early as 706 BCE. The pentathlon was a series of five events including the long jump, javelin toss, discus throw, short footrace, and wrestling match. Unlike the modern long jump, athletes would hold weights in each hand that they would throw behind them as they leapt.

A variety of kylix known as an “eye cup” for the distinctive large pair of eyes on either side of the exterior, this vessel features a young man sitting on a rock with his himation, or cloak, wrapped around his waist on each side. When tipped up for imbibing wine, these cups would look like a mask in front of the drinker’s face. The youth appears where a nose would be between the eyes. On one side of the exterior, the figure is identified by an inscription as Lykos and on the other only as a generic youth. Eye cups were produced between approximately 520 and 480 BCE at the end of the Archaic period. They were predominantly utilized in the Athenian symposium, an aristocratic party with drinking, philosophical discussions, and entertainment.

The interior image also has writing: the youth is surrounded by a small, floating inscription that claims “Diogenes is beautiful.” These kalos inscriptions, or beauty toasts, were a common feature of this type of Athenian drinking vessel and were tied to the Greek drinking game known as kottabos. Ancient Athenians mixed their wine with spices and water, and at the end of a cup of wine, there would be dregs at the bottom. These remnants would be flung at a target in the room and it was said that the successful kottabos player would win the either the affection of the person in the toast or other prizes.