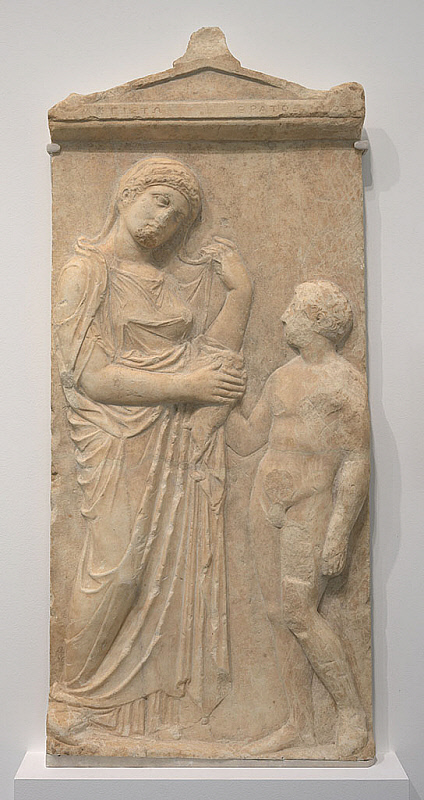 A standing woman, modestly draped, holds a small rabbit out to a nude child on a marble stela (sometimes referred to as stele) that once served as a funerary marker. Her name, Megisto, and that of the youth, Eratoxenos, appear above the figures. Megisto wears a light dress known as a chiton, a thicker wrap known as a mantle, and shoes. Her head is covered and she grasps the cloth in a gesture typically used in Greek art to indicate that she was married. Her hairstyle, partially visible under her cloak, reveals a ribbon wrapped around her head several times in a style popular during the Classical period (480–323 BCE). She gazes downward toward the young boy, but her head tilts outward to acknowledge the person standing in front of the monument as well. Eratoxenos, depicted unclothed and with slightly plump muscles, may be around 10 to 12 years old. He looks at the woman, and his right arm is raised to clasp either her arm or the rabbit. Additional details of the scene were probably added in pigment, now lost.

The subject is a variation of a typical theme in memorial depictions in which adults perform a dexiosis, or handshake, a gesture that acts as a final farewell between the dead and the living. In scenes with children, it is more common to represent the handing off of a small pet, usually a bird. Thus, this scene most likely represents a deceased mother and her young son, marking a last moment of interaction and farewell between the two. Both figures stand with their weight shifted onto one leg, known as the contrapposto pose, which became popular in the 5th century BCE. The preserved facial features of Megisto reflect a style influenced by sculptures from the Parthenon in Athens (constructed between 447 and 432 BCE).

This monument takes the form of a naiskos, a small temple, with a projecting triangular pediment and horizontal epistyle block on which the inscriptions appear. This form of tomb marker was popular in the second half of the 5th century until very early in the 4th century BCE. Typically, ancient Greek gravestones would be situated on and visible along major roadways outside of a city. Families would visit the tomb for regular upkeep to the plot as well as for memorial events. Women in ancient Attica did not lead very public lives, primarily remaining in the home. The high visibility of women on Attic gravestones of the Classical period like this piece, however, attests to their vital, but more private role in defining the family, raising children, and running households all activities that kept ancient society functioning.

Strong visual commonalities and similar tool marks on this piece to other Archaic Greek gravestones may indicate this relief was produced by a craftsperson (or several) from the Dexileos Workshop sometime between 420 and 390 BCE. The marble comes from Mount Pentelicus, an important quarry in central Attica. Pentelic marble is known for its high quality, including its quartz content and characteristic yellow hue. It was commonly used for funerary monuments, but also for structures such as the Parthenon.