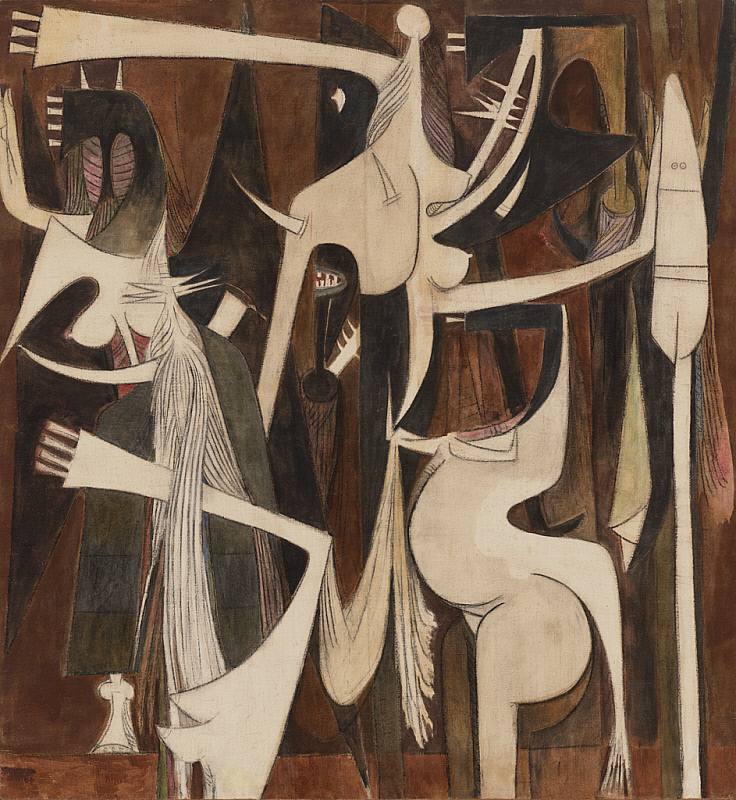 Painter Wifredo Lam (1902–1982) completed Cardinal Harps (Arpas Cardinales) (also titled The Visitors [Les visiteurs]; Nénomita) upon his return to Cuba after nearly twenty years spent in Europe. Now conversant with European modernism, Lam mined the richness of the pictorial tradition in his native country to develop a distinctive iconography that married Cubist abstraction and Surrealism’s fascination with myth, dream, and subconscious states with imagery from Cuba. The complex and open-ended symbolism of this painting is drawn from Santería, an Afro-Caribbean religion practiced by Lam that blends traditional African and Roman Catholic beliefs. The dense impenetrable foliage represents the jungle, the traditional site of Santeria rituals and the source of the plants and herbs that constitute its traditional medicines. Lam crowds distorted, overlapping figures into this mysterious landscape, which heightens the drama of the setting. The bodies in this painting simultaneously possess human, animal, and vegetal properties conforming both to Surrealist hybrids and to the Santeria belief system in which human, animal, and plant kingdoms are united.