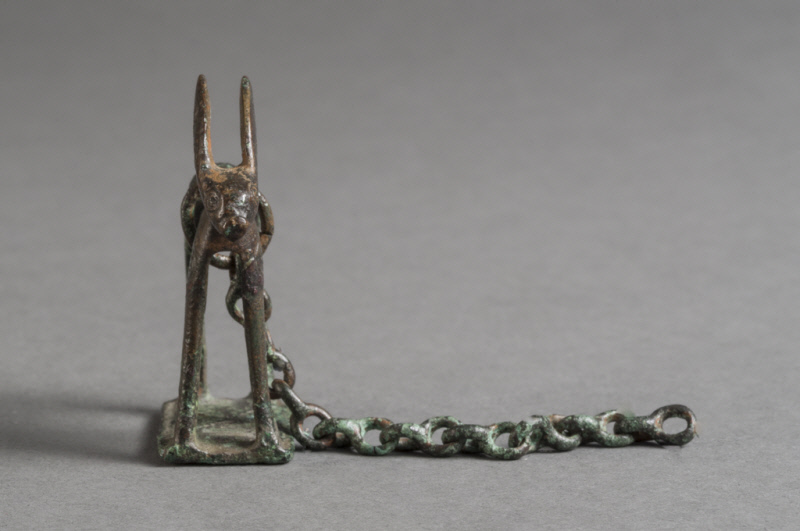 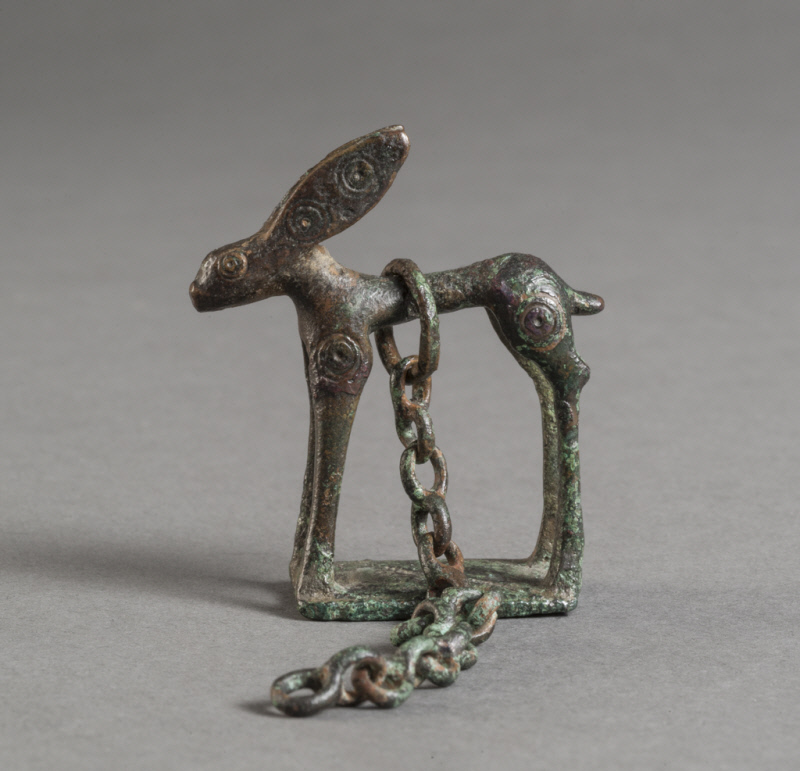 This small, bronze figurine of a doe, sometimes known as the Menil Fawn, has a short tail, compact muzzle, and oversized ears. It has a chain of nine double links attached by a ring around its middle. Examination of some other similar figurines has revealed evidence of chains, suggesting that they may have been pendants. Deer figurines such as this one, whether functioning as pendants or free-standing statuettes, were made in the Geometric period (about 900–700 BCE) using single-use wax molds in a technique known as lost-wax casting. Each piece created in this way is unique because the wax model is melted during the casting process. The concentric circles decorating the body and ears of the figurine indicate that it may represent a subspecies of deer known as the menil deer (Dama dama), quite fitting for its current home at the Menil Collection! This subtype was a medium-sized spotted deer native to Southwest Asia that was introduced to the Mediterranean region possibly as early as the Neolithic period (about 6800­–3200 BCE).

Acquired by the de Menils in 1963, the figurine’s archaeological provenience (where it was found, or its findspot) is unknown. However, through stylistic comparisons, we can deduce more about its probable regional origins. The figurine has been placed by specialists in a stylistic group of bronze deer figurines associated with the Maker of the Boston Doe and Fawn that were likely produced in Boeotia, Greece, during the latter part of the Geometric Period (about 750–700 BCE). Three similar figurines from a burial of a wealthy Boeotian woman (dating to about 750 BCE), known as the Kamilovrysi tumulus, indicate close stylistic ties to the Menil Fawn. Namely, the similar subject matter, oversized ears, and concentric circle designs on the deer figurines as well as the evidence that they were used as pendants, suggest that they most likely were made in the same area. During the Geometric period small bronze figurines of warriors or animals were especially popular as votive offerings at sanctuaries, including those in Olympia, as well as in funerary contexts in areas such as Boeotia.