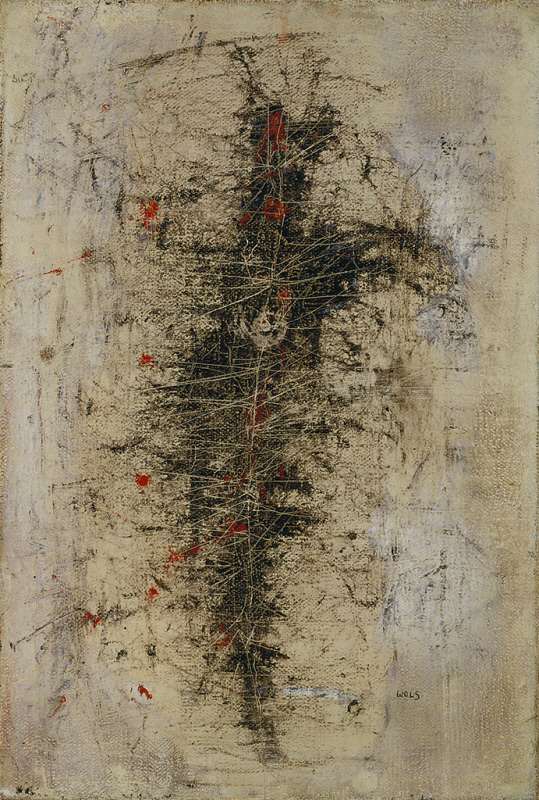 By the time he took up oil painting in France in 1945 and 1946, the German-born artist Wols (Alfred Otto Wolfgang Schulze, 1913–1951) was already known among certain circles of the Parisian avant-garde for his drawings, watercolors, prints, and photography. In near constant movement between Germany, Spain, and rural and cosmopolitan France in the 1930s and early 1940s, he was ultimately involved with two of the major artistic movements of the day: Surrealism and Art informel. Surrealism, which first launched in Paris in the mid-1920s, had made early use of practices in which a willful abdication of rational control over the creation of artworks was thought to expose truths about contemporary life otherwise repressed by the conditions of modernity. Wols’ engagement with Surrealist practices and motifs is most evident in his drawings and photographs of the 1930s. Art informeI was the name given to a strain of abstract painting that emerged in France just after World War II. Characterized by its abstract subject matter and gestural paint application, the movement was seen as an existentially charged effort to forge something new from the wreckage of the war.

This untitled work, painted just after the war, displays characteristics of both movements. On the one hand, its ambiguous central form appears as if conjured from the canvas itself, a latent image made visible through an “automatic” process much like those of early Surrealism. On the other hand, Wols’ insistent scratches and his apparent use of a paint tube to stamp circles onto the painting’s surface are unmistakable traces of the bodily act of painting, a critical aspect of what made Art informel such a vivid expression of postwar existential questioning.

Several of Wols’ earliest commentators, interpreting his works in light of the war, understood works like Untitled (Composition) to operate around the theme of the wound. For French philosopher Jean-Paul Sartre, who knew Wols personally, the painter’s anguish was evident even in works that preceded the war. For Sartre, Wols’ artworks were a record of his attunement to how any outside forces could threaten his sense of himself. Yet in this painting, there’s an ambivalence built into the treatment of the wound. His scratches, unmistakable metaphors for violence, also seem to depict stitches, as if the image is a record of both violence and healing.