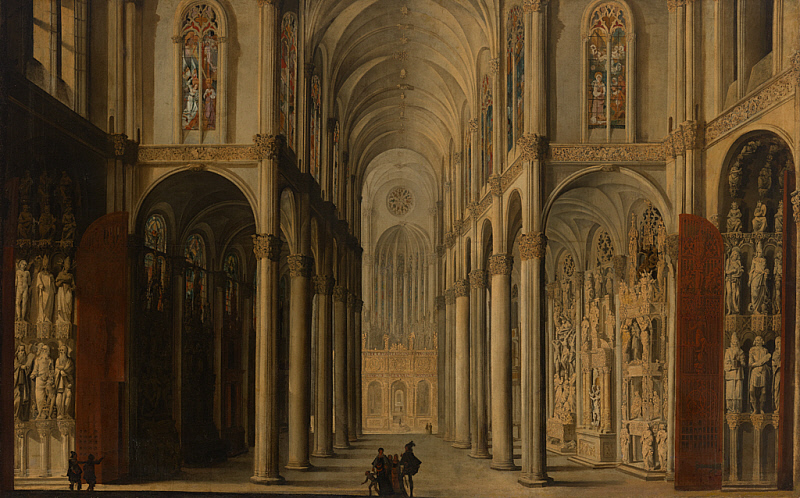 Born in Metz, France, around 1593, François de Nomé moved to Rome as a child, where he apprenticed as a painter in the workshop of the Flemish artist Baldassare Lauri. Around 1610, de Nomé established himself in Naples as a painter of imagined architecture, theatrical biblical and mythological scenes, and dramatic images of cities in ruin. Although he fell into obscurity shortly after his death around 1644, de Nomé’s paintings were rediscovered in the 1930s. Both his mysterious life and his compelling canvases fascinated scholars and collectors in the mid-20th century, bringing much deserved attention to his work.

At more than 6 feet tall and 10 feet wide, Interior of a Cathedral is the largest known painting of the subject attributed to de Nomé. Using a precise, single-point perspective, the artist created an impossibly immense Gothic cathedral of his own imagining. Tiny silhouetted figures in the foreground and background stand in extreme contrast to the height of the nave, further exaggerating the unreal proportion of the architecture. The monumental, rigidly defined space teems with an obsessive profusion of sculptural figures in animated poses. De Nomé used thick impasto to enrich the three-dimensionality of both the statuary as well as of the columns’ florid capitals. Precisely detailed stained-glass windows—the Annunciation on the left, the Adoration of the Shepherds on the right—offer the only colorful passages in a canvas that is otherwise dominated by muted shades of cream and ocher. On the left, angular light and strongly defined shadows contrast with the overall luminosity of the nave. In Interior of a Cathedral, de Nomé conjures a dreamlike atmosphere through the subtle manipulation of detail, rather than the addition of conspicuous oddities.