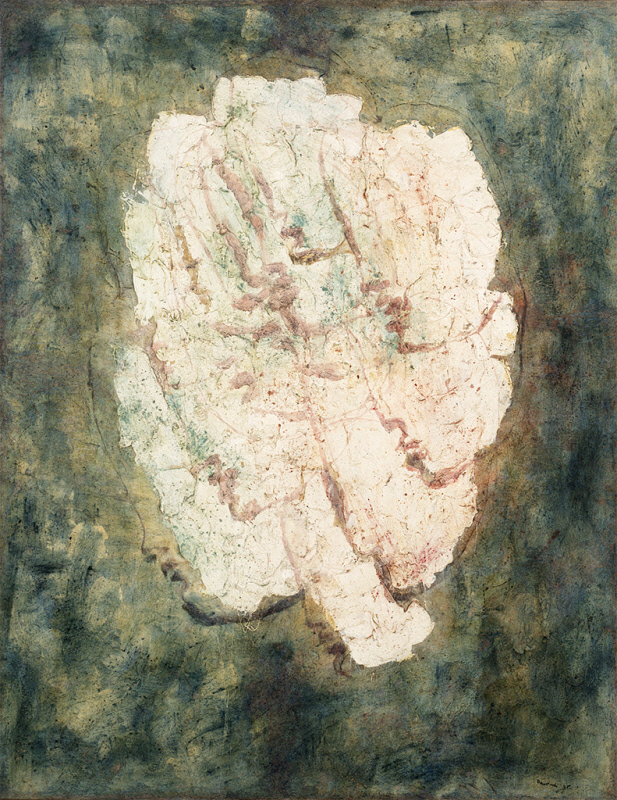 In Oradour-sur-Glane, French artist Jean Fautrier inscribed nearly a dozen facial profiles in pinkish-brown on top of a thick white paste-like ground. Isolated on this central mass and looking down in unison, the faces appear to be caught in a single collective experience. The title of the work links it to a specific historical atrocity: Oradour-sur-Glane is the name of a small village near Limoges, in southwest-central France, where German troops massacred 643 people in 1944.  First exhibited in 1945 in a newly liberated Paris, Oradour-sur-Glane was among a series of paintings and sculptures which took “Hostages” (Les Otages) as their theme, a commentary on the occupying German forces’ practice of taking French citizens hostage, often killing them, in reprisal for acts of resistance. Although Fautrier had already shown works in 1943 using the same method of applying washes of color and powdered pigments on top of sculptural white grounds, with the Otages he was aligning his unusual painting methods with the traumatized bodies that had become his subjects.

The relationship between Fautrier’s methods and this new motif was uneasy from the beginning. Writing in the catalogue for the first exhibition of the Otages, prominent French novelist and Resistance fighter Andre Malraux lauded Fautrier’s works as “the first attempt to flay the pain of our time to the point of finding its pathos-filled ideograms.” Even as Malraux admired Fautrier’s willingness to engage with France’s recent past, however, he acknowledged the difficulty of the painter’s gambit of doing so in a language that made such free use of its materials. “Are we always convinced?” Malraux wrote. “Aren’t we embarrassed by some of these pinks and these almost tender greens . . .?”  Poet Francis Ponge thought the artist’s methods were justified precisely because of his theme. For Ponge, Fautrier had tapped a subject of such universal empathy that he was free to focus on the formal problems of painting itself: “Do we say that the faces Fautrier painted are pathetic, moving, tragic? No: they are thick, traced with wide lines, violently colored: they are painting.” Others were not convinced, wondering if any painting was capable of attesting to France’s recent history. But the questions these paintings ask about the relationship of painting to reporting, of beauty to horror, and of painting’s materials and the job of representation, are still valid today.