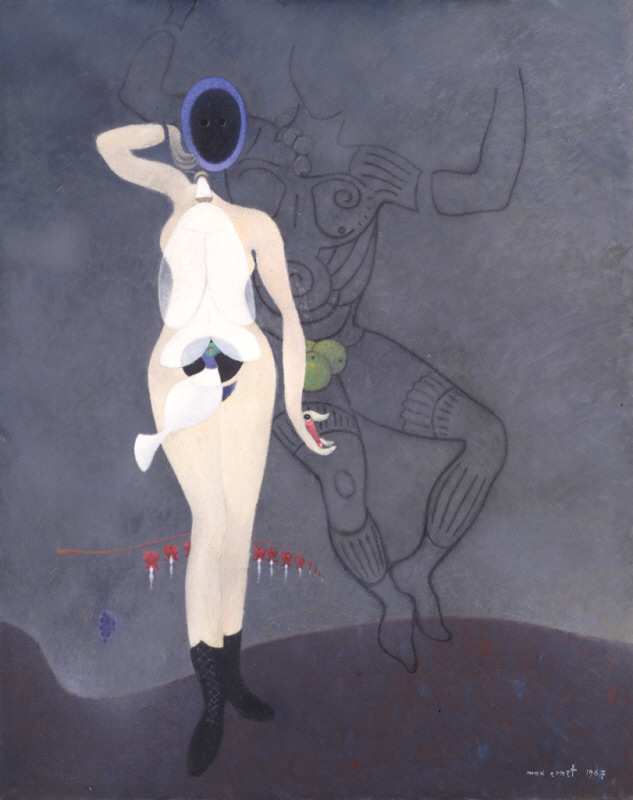 German artist Max Ernst long mourned the loss of his painting The Beautiful Gardener from 1923. Completed in Paris shortly after his relocation there, the painting entered the collection of the Kunstmuseum Dusseldorf in 1929. In 1937, it was seized by the state and included in the infamous “Degenerate Art” exhibition, where it hung under the banner “An Insult to German Womanhood.” Now lost and presumed destroyed, it was also reproduced in the accompanying catalogue. Some forty years later, Ernst reprised the painting, giving it the expanded title of Return of the Beautiful Gardener. It shares its title (in French, La Belle Jardinière) with a painting by the Renaissance artist Raphael of the Virgin Mary, Christ Child, and infant St. John in the Louvre Museum’s collection. Raphael was an important touchstone for Ernst, who often peppered his work with art historical borrowings. Indeed, in 1922, he had included Raphael in a painted group portrait of the Surrealists. But La Belle Jardinière was also the name of a hundred-year-old department store in Paris—a juxtaposition of 16th-century Italian painting and old-fashioned French commerce that pleased the artist. With Return of the Beautiful Gardener, which Ernst called a “transfiguration” of the earlier painting, he added another, self-referential layer to the painting’s historical citations. Now, the painting not only alluded to Raphael’s Madonna portrait and an outmoded French emporium, but also to an earlier moment in Ernst’s own artistic practice.