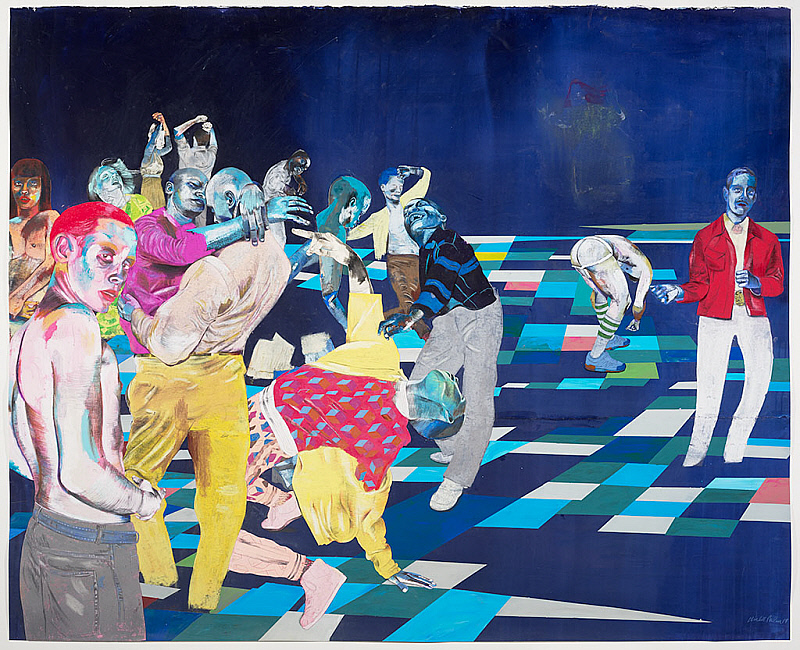 Pulse commits to paper the spirit of the nightclub with the same name, which was known as a haven for LGBTQ+ and Latinx people in Orlando, Florida, where one of the deadliest shootings in United States history was perpetrated on June 12, 2016. Imagining the moment just before this act of violence, Milan captures Pulse’s community that, in the face of violence and calculated erasure, pursues joy in being together.

The large composition is made up of a series of vignettes of intimate, individual portraits of club-goers, some of who perform intricate moves reminiscent of the vogue dance style of the 1980s defined, in part, by angular movements and postures originally inspired by Egyptian hieroglyphs and poses in the eponymous fashion magazine. One of the central figures in the drawing wears a yellow sateen jacket, a geometric patterned sweater with pink pegged pants, and a pair of pink high-tops. This depiction of the clothing style of the 1980s and ‘90s is anachronistic in a drawing of a nightclub in 2016. However, by highlighting these trends, the drawing references those decades that were historically significant in American queer cultural history with the advent of the contemporary house ballroom scene, the mainstreaming of vogue, and the HIV/AIDS epidemic. The unnatural colors used to depict the subjects—from blue skin to primary-color red hair—almost recreates the experience of the distorted vision one has while under strobing, flashing lights at a nightclub. The vibrancy of the coloring not only produces a luminosity on the figures’ faces that highlights their vitality and their humanity, but it also could serve to code the figures as queer.

Milan’s drawing practice is conceptually underpinned by an understanding of photography that draws on a cache of figural references in both the history of art and the legacy of editorial photography. He captures and documents figures in a single moment, in a pose, while adding the suggestion of movement through drawing and collage. Here, Milan’s particular attention to the figures’ hands made using cut, pasted, and, in some cases, lifted paper collaged onto the support, coupled with the rhythmic, almost pulsing lines in charcoal and graphite, together draw attention to the fact that the club-goers are dancing to the beat.