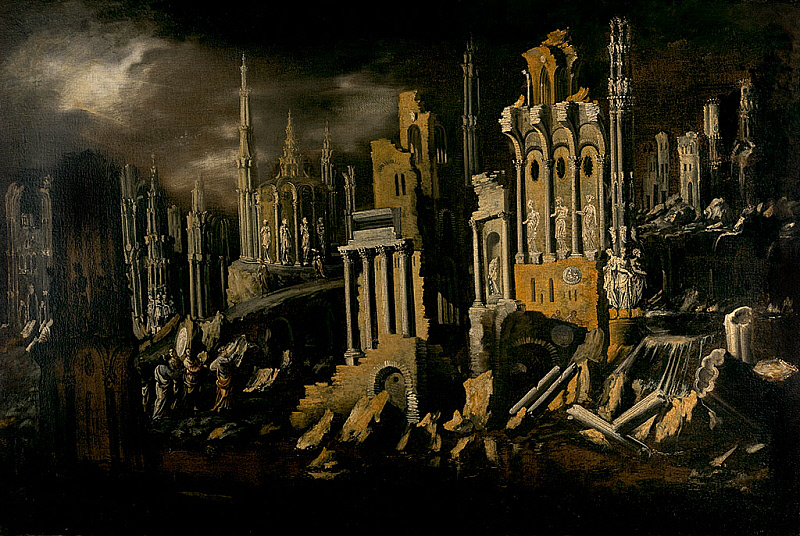 Born in Metz, France, around 1593, François de Nomé moved to Rome as a child, where he apprenticed as a painter in the workshop of the Flemish artist Baldassare Lauri. Around 1610, de Nomé established himself in Naples as a painter of imagined architecture, theatrical biblical and mythological scenes, and dramatic images of cities in ruin. Although he fell into obscurity shortly after his death around 1644, de Nomé’s paintings were rediscovered in the 1930s. Both his mysterious life and his compelling canvases fascinated scholars and collectors in the mid-20th century, bringing much deserved attention to his work.

The Menil Collection’s A City in Ruins at Night, ca. 1625­–30, shares the same dimensions with another painting by de Nomé, The Martyrdom of Saint John (located in a private collection), and the two may have originally been conceived of as a pair. The paintings belong to what scholars refer to as de Nomé’s “dark paintings,” named for the somber palette that pervades these canvases. A City in Ruins at Night depicts a darkened landscape dominated by a series of architectural monuments, all of them de Nomé’s own invention, amalgamations and elaborations of the Classical, Renaissance, and Baroque structures he encountered in Rome and Naples. These buildings, and the animated sculptural figures that enliven them, collapse into ruin, the drama heightened by the scene’s theatrical lighting. Such works have been interpreted as a variation on the vanitas theme, reminders of the ephemerality life and the futility of humankind’s material pursuits.