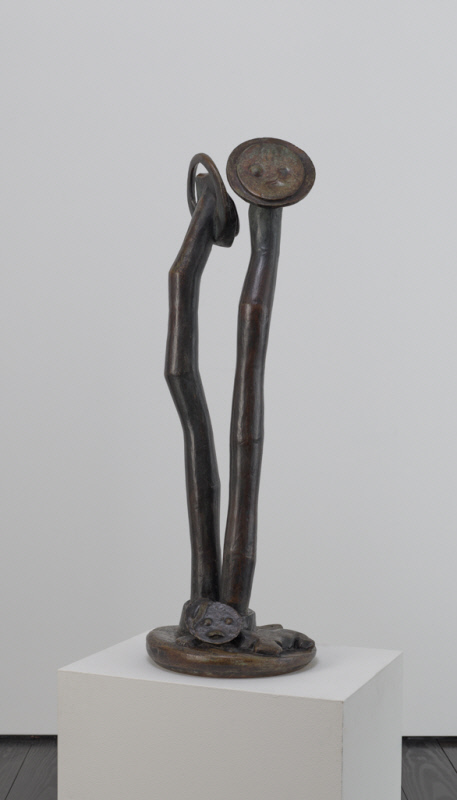 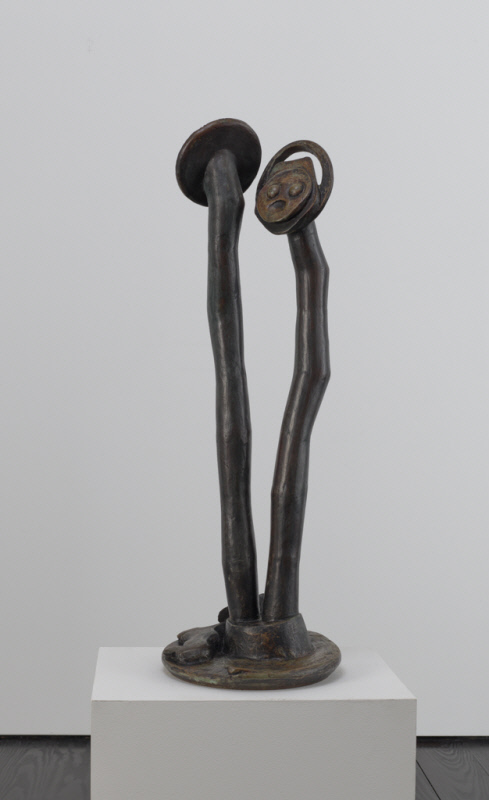 Soul Mates, a three-foot-high bronze sculpture by the German-born artist Max Ernst, depicts two figures who stand on slender bodies while a third lies, like a pet, at their feet. The work shares its basic components—figures with mask-like features, held aloft from a prominent base by elongated vertical elements—with many of Ernst’s sculptures from this period and earlier, including the Menil Collection’s Lunar Asparagus, of 1935.

In his sculptures, Ernst often combined forms in a process known as assemblage. Rather than carving from a mass of stone or wood, or building from a material like clay, this process allowed Ernst to mobilize the properties of a wide range of materials in a single work. Although its initial material heterogeneity has been minimized in its final casting in bronze, the work retains a sense of having been built from discrete things. That these elements were often found, not simply made, was important: as the Surrealist André Breton recognized in his 1936 text “Crisis of the Object,” the use of found objects gave Ernst access to “an ambiguity which is sometimes amenable to extremely bold interpretations”—what Breton saw as Ernst’s key contribution to the Surrealist aspiration for the “total revolution of the object.”

Using forms drawn from the world—not just the artist’s studio—endowed Surrealist works with the suggestion that nature itself could produce meaning. The artists of this movement saw the same suggestion in many objects made by Indigenous peoples. Because these objects often derived from ritualistic functions and not mere aesthetics, various Surrealists invoked them as models for their own rebukes of European rationalism. The Surrealist embrace of such forms carried a political valence, too—in the text cited above, Breton argued for the need to fight the “stultifying proliferation” of consumer objects under capitalism. In the landmark Surrealist Exhibition of Objects held at the Charles Ratton Gallery in Paris in 1936, Surrealist works, including Ernst’s manipulated found objects, were installed alongside the arts of Indigenous peoples from the Americas and the Pacific Islands. Soul Mates, made a quarter of a century later, retains its links to that earlier era of the Surrealist object. In dialogue with both Native American and Pacific Island models of art and the works of fellow Europeans like Alberto Giacometti, Ernst portrays nature as the uncanny double to human culture.