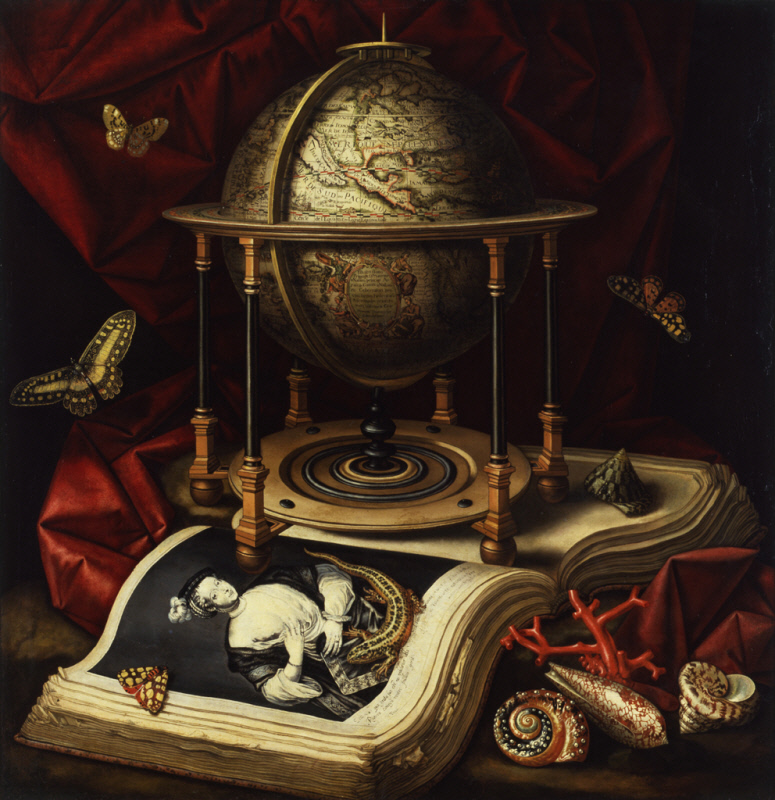 By the middle of the 17th century, Belgium and the Netherlands composed the most prosperous region in Europe, dominating world shipping and trade and controlling colonies in Africa, South America, and Asia. As a result of their growing affluence, their citizens developed a remarkable enthusiasm for collecting paintings of all subjects, including sumptuous still lifes that illustrated the wealth, power, and global reach of these small countries. This example, by Antwerp-based painter Christian Luycks, shows an arrangement of apparently unrelated objects and creatures—a terrestrial globe, butterflies, seashells and coral, a salamander, and a book of engravings—set in front and on top of a loosely draped, luxurious fabric. The exotic fauna and the globe itself were in keeping with the growing interest in scientific curiosities and the popular demand for objects evocative of foreign travel. This particular assortment of items also served as an allegory for the four basic elements: a globe represents earth, butterflies indicate air, shells signify water; and a salamander represents fire, an association dating back to antiquity. Additional layers of symbolic meaning emerge from the book represented in the painting. It lies open, displaying an engraving after a painting by the esteemed 16th-century Venetian artist, Titian, alluding to the Italian Renaissance. The Latin inscription below the plate identifies the subject of the portrait as Titian’s common-law wife and indicates her pregnancy. The image of a young, pregnant woman now (and at the time of the painting’s creation) long-dead, has been interpreted as a memento mori or vanitas—a reminder to the viewers of the fleeting nature of time and the impermanence of youth.