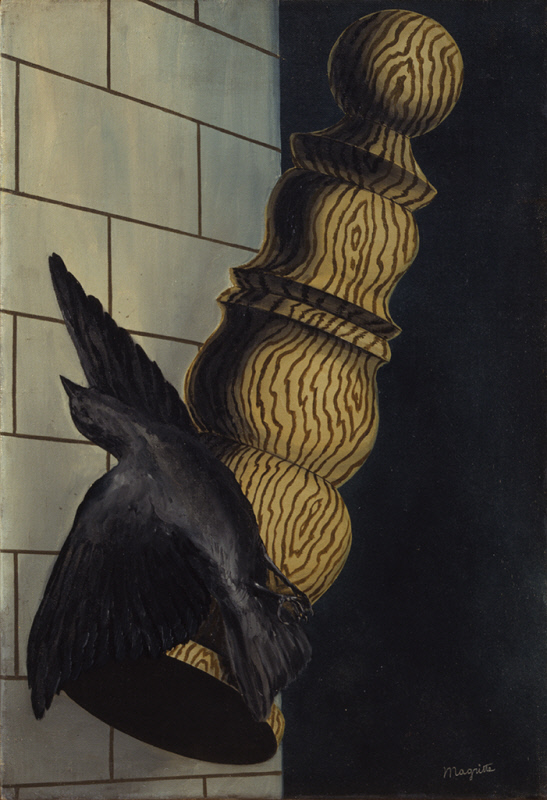 The Belgian painter René Magritte composed The Law of Gravity from four simple elements: a piece of turned wood, a bird, a cinderblock wall, and an area of pure black. Magritte’s precise painting style suggests he was at pains to make these forms correspond to our sense of real things. The cinderblocks recede in convincing perspective. The sheen of the bird’s feathers registers light just as a real bird’s might. The wooden element, in its meticulous graining and careful illumination, is also painted to convince us of its material tangibility. Each of these factors plays with our expectation that the painting somehow corresponds to the world we inhabit, an expectation that Magritte worked just as hard to undermine. What possible real-world condition can the black void register, reflecting none of the light that otherwise pervades the scene? Is the bird in flight or in a free fall? Why does the wood piece appear to float in space when the painter has invested such effort in endowing it with all the properties of a real, weighty thing?

Magritte painted this image in 1928, in the middle of a three-year stay in Paris during which he was in close contact with the artists of the Surrealist movement. What Magritte brought to the Surrealists in this period, just four years after the group’s founding, was a sense that figurative painting, like other Surrealist practices, could be used to expose a “sur-reality” hidden below the surface of things. In The Law of Gravity, Magritte plays with the elements of the children’s game of bilboquet (in which a ball is flipped by a turn of the wrist in an attempt to land it on a wooden peg or cup), of interest to several Surrealists for its sexual connotations and for the challenge that this outmoded object was thought to present to modern society. Replacing the ball in the typical iteration of the game with a bird, Magritte undermines the basic terms of the game by inserting the question of flight or fall—and life and death—into the scene. The disconnect between the actual game and his image is heightened by his exacting painting style. Rather than affirm figurative painting’s correspondence to a world of real things, Magritte frustrates such a correspondence. In figuring this surreality on the canvas, he brings a hidden valence of the game alive, while casting the entire premise of representing a fixed reality into doubt.