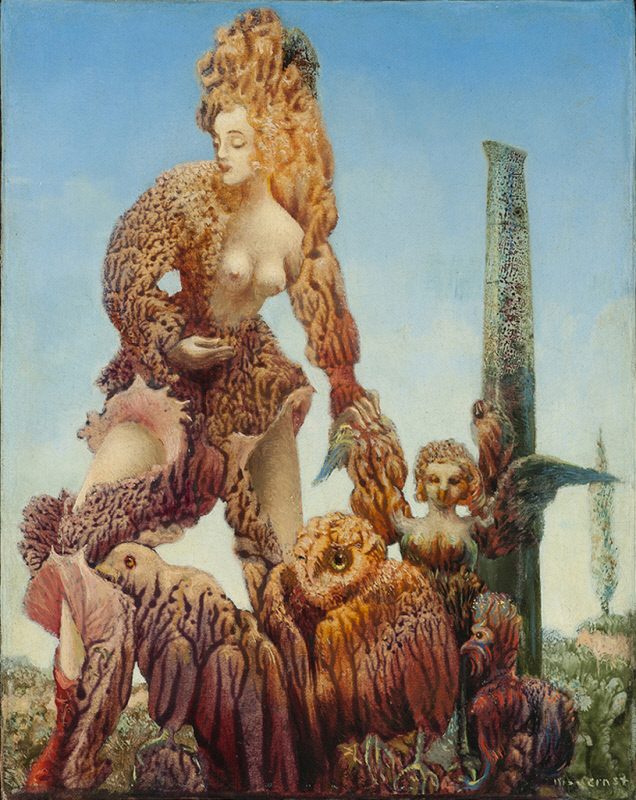 In late 1939 and 1940, after living in France for almost 20 years, German artist Max Ernst was repeatedly imprisoned in internment camps in southern France as an enemy alien. According to an inscription on the back of the canvas, he painted Marlene during this harrowing time, before his flight to the United States in the spring of 1941. “Déc 1940 – janv 1941,” it reads, “MADE IN FRANCE.” The painting’s subject, too, seems to address migration and escape: a woman leads four bird-like creatures, leaving an architectural column and a cypress tree behind. She holds one creature by the wing, and two others burrow against her striding legs. Ernst created this painting using decalcomania, a process in which a flat sheet (often glass or paper) is pressed against a painted surface and then removed. The combination of pressure and suction leaves behind a mottled paint surface, almost coral-like in its furrowed and fuzzy ridges. Ernst was one of several Surrealist artists who experimented with decalcomania, embracing this automatic technique in an attempt to remove conscious control from the artistic process. For Ernst, decalcomania became the starting point for further elaboration. Here, the figures seem to at once emerge from, and petrify into, the decaying, mottled landscape that surrounds them.

The Secret of the Hanging Egg: Salvador Dalí at the Menil
Modern and Contemporary Art