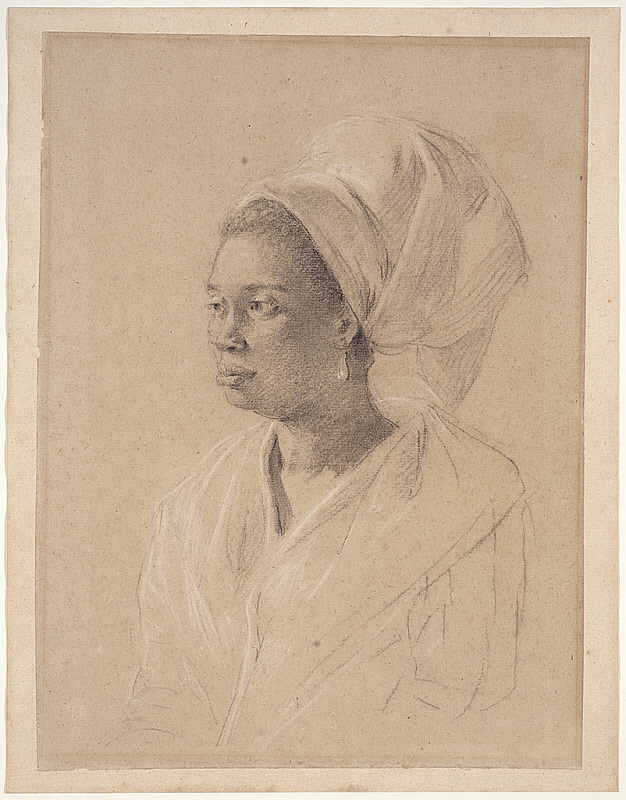 This drawing, attributed to the French artist Pierre Ozanne (1737–1813), depicts a West African female sitter. Ozanne, born in Brest, France, was from a family full of artists—four of his five siblings were illustrators and painters. Trained by his older brother Nicolas, who helped him secure the position of chief illustrator at the naval base in Brest (Maître à dessiner des gardes de la Marine) at the age of 20, Ozanne is best known for his depictions and designs of naval vessels, maritime cartography, and views of his natal town. In 1771 he joined the Campagne de la Flore, a scientific expedition commissioned by the French Royal Academy of Sciences to test the accuracy of chronometers at sea. Aboard the La Flore, he sailed to Spain, the Canary Islands, West Africa, Newfoundland, and other ports. This drawing is one of several that Ozanne executed during or after his voyage.

Ozanne did not sign the drawing or record the name of the woman depicted, but related examples of his drawings suggest she possibly was a Wolof- or Serer-speaking woman from Gorée Island, a port of call for the La Flore during several weeks in January 1772. Off the coast of present-day Senegal, Gorée Island was a possession of France and one of the largest centers for the European trafficking of enslaved West Africans. This history complicates Ozanne’s studied three-quarter portrait of this unknown sitter and her gaze. He treated the face and earring (jaaru-noppa in Wolof) with detailed dexterity and quickly sketched her blouse and head wrap (musóor) with dark outlines and white chalk. The head wrap and detail of the earring suggest the sitter may have been a signare. A class of powerful African and Creole women who often sat for portraits, signares were merchants, owners of land and enslaved people, and consorts of European officials in Gorée and St. Louis.