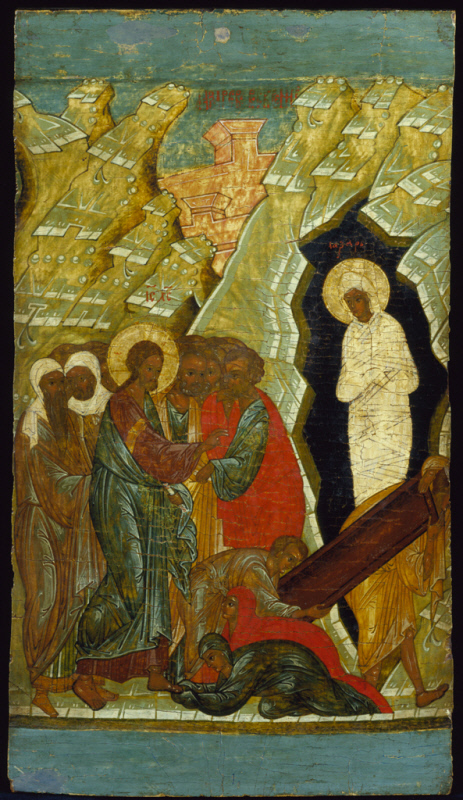 Raising of Lazarus condenses the long account of an event given in the Bible (John 11:1–46); the complex narrative in which Jesus raises Lazarus from the dead has been arranged onto a single panel painting of modest size. Lazarus, shrouded in linen, occupies his tomb, from which funeral workers remove the door. The town of Bethany can be seen in the distance behind a range of white mountains. The central figures include Christ, the disciples, and Lazarus’s sisters (Martha in blue-green and Mary in red) prone at his feet. In his treatment of the draped human body, the artist sustained older Byzantine traditions in which corporeality was expressed by firm lines and crisp folds of cloth to define the shapes. The Jews who have come from Jerusalem to comfort Martha and Mary are identifiable by their white scarves. The distinctly stylized mountains, shown as rows of rectangular and circular contours, were commonly found in paintings from the Novgorod region. The icon’s blue borders, which have been sawed off on the left and right edges, date the work to the early 15th century, when the art of Novgorod was at its peak. This panel was likely originally part of a Dodekaorton row of iconostases—the twelve important celebrations of the liturgical year depicted in a Byzantine church.