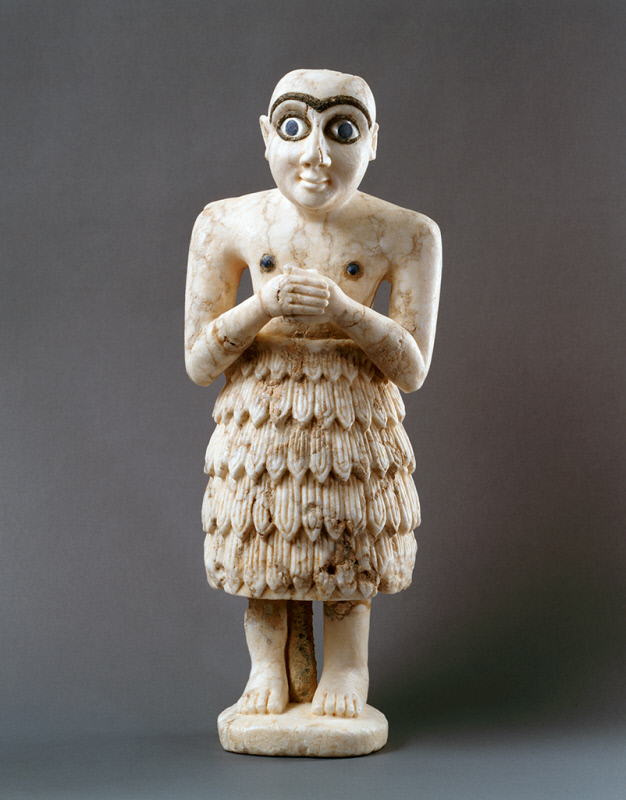 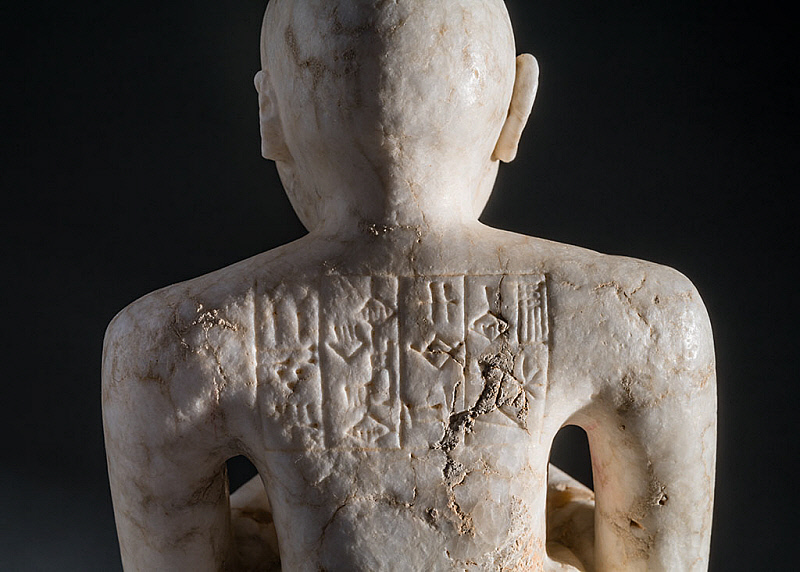 Standing with hands clasped, this Sumerian votive figure from the Early Dynastic period (around 2900–2350 BCE) acts as a perpetual petitioner to a god or goddess on behalf of the devotee. The inlaid materials used for the brows and eyes provide a stark contrast with the pale alabaster stone, emphasizing the figure’s arresting gaze. His exposed torso and a knee-length tufted skirt, a type known as a kaunakes, is a combination associated with the art from ancient Mesopotamia. Offerings of statuettes were first displayed within temples in Sumerian city-states, and later large numbers of these votive figurines were buried within sacred precincts in order to preserve the offerings to the deities. These hoards have been found at sites such as Eshnunna (modern Tell Asmar, Iraq) and Mari (modern Tell Hariri, Syria). In this polytheistic society, there would typically be a main temple dedicated to the patron god or goddess as well as subsidiary temples for other deities.

Broken and repaired in antiquity as well as in modern times, the sculpture reveals evidence of both use and reuse in its long life. A metal pin inserted behind the left leg indicates an ancient repair, possibly to support the weight of the upper part of the figure after the stone leg was broken. The wrists and the midsection of the body have been mended, although it is unclear when in the object’s history these repairs occurred. An inscription on the back, however, most likely represents one of the modern modifications.

The inscription, written in cuneiform, is located between the shoulder blades of the figure in four columns. The text records a ruler named Eannatum, son of Ayakurgal (alternatively, Akurgal). Eannatum was the grandson of Ur-Nanshe, who was the first king of the ancient city-state of Lagash, east of present-day Ash Shatrah, Iraq, around 2500 BCE. Eannatum himself became the énsi (a ruler or lord) of Lagash sometime before 2400 BCE. As énsi, Eannatum expanded control beyond Lagash to other city-states along the Tigris and Euphrates Rivers to establish an empire that included the region of Sumer in the south and part of Akkad in the north. Inscriptions indicating the devotee are relatively rare on Early Dynastic sculptures. In addition, the type of cuneiform script used in the inscription is atypical for stone sculpture. It is more commonly found on ceramic tablets and writing blocks. Scholars have suggested that this inscription was added to the ancient figure sometime later, possibly as late as the 20th century, which indicates the continued desire to engage with this votive figure as well as an attempt to associate a known identity with the figure.