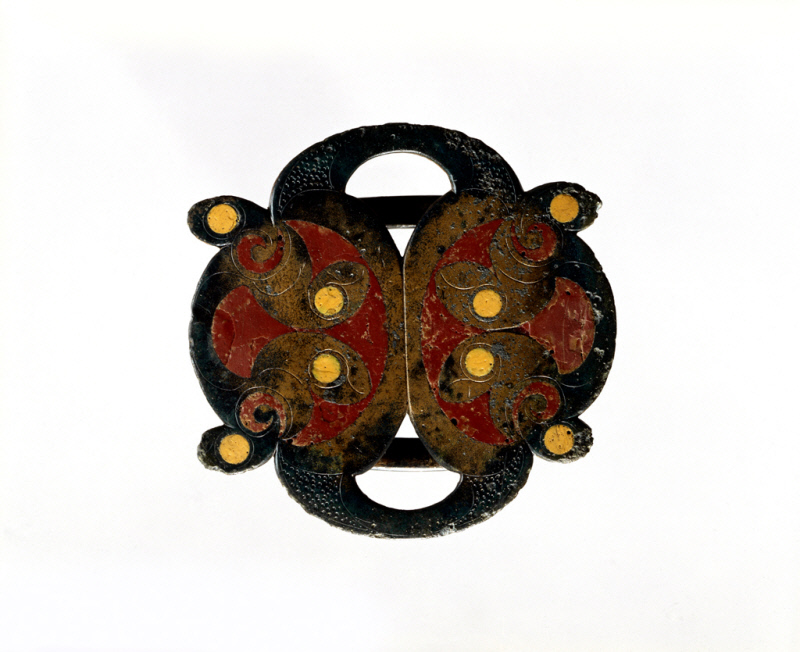 This small bronze openwork plaque, decorated with red and yellow champlevé enamel, shows the technological achievements as well as the artistic talents of the metalworkers of the second, or La Tène, Iron Age that encompassed much of Europe from the 5th century BCE to the 1st century CE. As a harness decoration, it also reflects the importance attached by Celtic tribes to horses and their accouterments; a strap union, or strap junction, it was intended to cover the meeting point of two or more leather straps. The flat part of the plaque was produced by the “lost wax” method, in which a wax model is made and covered with clay, which is allowed to harden, and then molten bronze is poured into the mold, replacing the wax. Since the clay mold always has to be broken to extract the finished object, no two items made this way are ever identical. The loops were brazed onto the reverse of the plaque, which was also smoothed and polished: some of the tool marks on the rear surface may have been created by a scraper on the wax model, but others seem to be still-visible marks of the planishing hammer. The red and yellow enamel was then inserted into the fields that had been created during casting. Further emphasis was provided to the design by means of incised lines and by the punched dotting that fills the curved triangles.

This and a second strap union were discovered in 1978 in Hambleden, Buckinghamshire, in southern England, by means of a metal detector. The other strap union was also a four-lobed, or quadrilobe, harness mount, but it was much more damaged and of a different design. They are among the 10 known quadrilobe mounts, all found in southern England, save one discovered in northern France that was almost certainly an export from Britain.1

In design and style, the Menil mount is most like the one found in France, which has 10 curved triangular voids, but the yellow enamel is similar, occurring in round dots, and there is like punching on the metal.2

The two major areas of the mount are visually separated by an incised straight line. When this line is placed horizontally, two side elements show as curves of metal enclosing triangular voids with curved sides, one curve convex and the other two concave. The design is based upon a compass layout with these curved triangles as the dominant element: they form eight of the twelve areas of red enamel. (The other four red enamel areas are in the shape of commas, forming a yin-yang shape with the plain bronze.) Where each openwork side piece joins the rest of the plaque, four more incised triangular shapes are set in relief against the smooth metal by dotted infilling. Even more curved triangles have been cut into the plain metal beside each of the eight circular yellow enamel inserts.

Disappearing “Cheshire-Cat” faces and reversible imagery are characteristic traits of La Tène period Celtic art and are featured here. Using the “ears” at the top and bottom, each enameled part creates a reversible face, with the yellow enamel as eyes. If the plaque is rotated 90 degrees so that the openwork curves are at the top and bottom, crested birds’ heads are visible, the crests and beaks each marked by a yellow dot and with the eyes formed by the red enamel commas.

Enameling, a skill apparent in La Tène Europe from about 400 BCE, reached its apogee in the products of late pre-Roman Britain. Enamel began to be fused to metal in the middle of the 3rd century BCE,3 but only one color of enamel—an opaque “sealing wax” red—was used until late in the La Tène period. Since glass beads in various colors had been made as long ago as the late Bronze Age, and La Tène glass arm rings and beads commonly used other colors such as white, yellow, or blue, this restriction was clearly a matter of choice. But by the later 1st century BCE, craftworkers in the British Isles had begun to add yellow and blue enamel to their repertoire, producing, as on this beautiful mount, subtle, ambiguous, and complex designs with assured skill.

Ruth and Vincent Megaw, The Menil Collection: A Selection from the Paleolithic to the Modern Era (rvsd. ed., 1997)