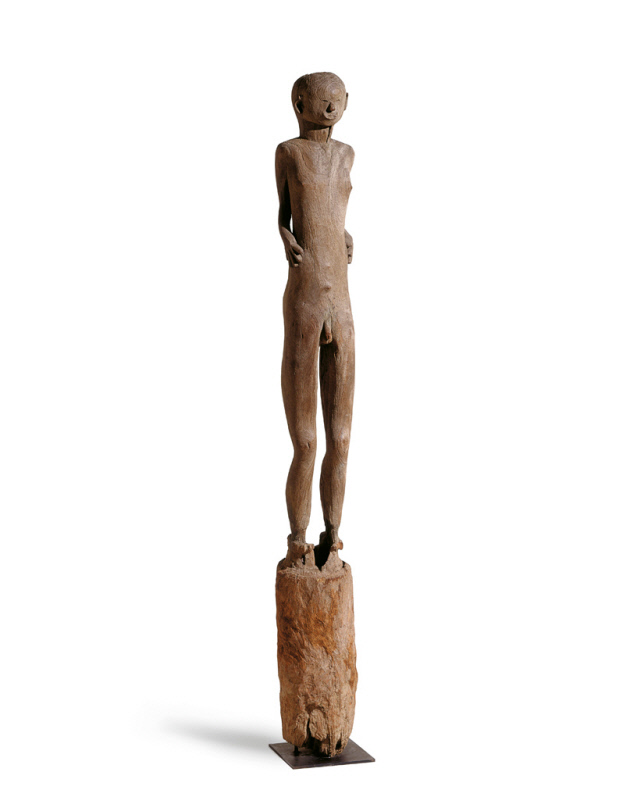 This exceptional work was probably created at the turn of the 20th century to memorialize the achievements of a respected man, most likely a hunter or perhaps a community leader. Commissioned by his family, it would have been erected at the first anniversary of his death to commemorate his deeds, along with a public recitation of his specific contributions in protecting and providing sustenance for his community. The great size and artistic mastery of this work indicates that it honored a particularly high-ranking individual. The artist shaped a single tree trunk of mahogany into a simplified human form of singular power. The figure stands with flexed knees, and his pulled-back arms are held tightly against the body, emphasizing the expanse of his taut chest. This gives the figure a compelling sense of potential movement and controlled authority. Heavy rains smoothed its surface over the years and the weathered patina speaks to the many decades the figure stood as a sentinel at the celebrated man’s tomb.

The sculpture is one of 17 works collected by Christian Duponcheel in southern Sudan (now South Sudan) in 1972; together they mark the introduction of a rare and old corpus of Sudanese figural works to the west. Six of these sculptures, representing the apogee of this style, are now in some of the world’s most renowned museum collections. The Menil Collection’s funerary figure is distinguished among them by its unusually large size and its sensitive and expressive composition.

Although the work is attributed to “Bongo” or “Belanda” peoples, these names are really a creation of the literature. Bongo is used by a group in southwestern Sudan to identify themselves as “men” in the generic sense; the term also refers to a language group. Belanda is a shortened form or “Beer-landa,” which refers to Luo-speakers who also live in southern Sudan. The term literally means “Luo-speakers of the hill.” Both peoples were predominately subsistence agriculturalists. They were nearly annihilated at the turn of the twentieth century, victims of slave raids, local wares, and the Anglo-Egyptian reconquest of Sudan in 1898. Today they are few in number and live in sparsely populated rural areas. They continue to commission memorial statuary.