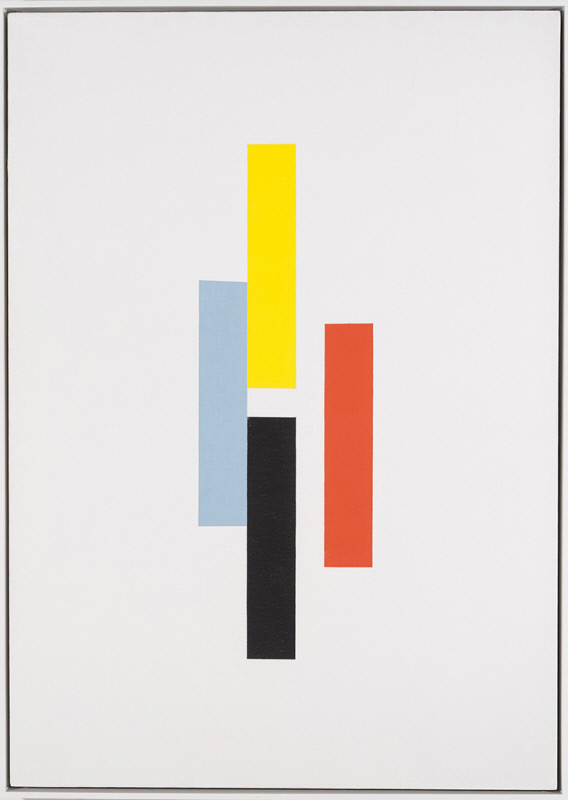 John McLaughlin (1898–1976), born and based on the United States’ East Coast for the first part of his life, has long been recognized for his geometric paintings from the postwar period. From a young age McLaughlin developed a deep knowledge of Japanese and Chinese art, which would later inform his painting practice. McLaughlin began to collect and sell Japanese prints in the late 1920s. With his wife, Florence Emerson (the grandniece of Ralph Waldo Emerson), the artist traveled to Asia between 1935 and 1937, visiting Japan and China. In Tokyo, McLaughlin collected prints, which he then sold in a gallery he founded in Boston named Tokaido, Inc. After serving as a Japanese translator during World War II, McLaughlin settled in Laguna Beach, California, where he painted full-time while continuing to sell Japanese prints.

The self-taught artist began to garner acclaim in Southern California through local juried exhibitions. In 1952, the Felix Landau Gallery in Los Angeles began to exhibit his work and he would have his first solo exhibition there. Although he remained mostly removed from Los Angeles’s contemporary art scene, McLaughlin was included in important exhibitions, including Four Abstract Classicists at the Los Angeles County Museum in 1959. Curated by Jules Langsner, the exhibition presented the paintings of Southern Californian artists Karl Benjamin, Lorser Feitelson, Frederick Hammersley, and McLaughlin. Langsner and art historian Peter Selz coined the term “hard-edge” to describe the abstract paintings of McLaughlin and other artists on the West Coast, which were characterized by sharply delineated, flat, solid forms and marked a departure from the more gestural tradition of Abstract Expressionism. In 1963 McLaughlin received his first survey at the Pasadena Art Museum, organized by Walter Hopps (who would become the founding director of the Menil Collection in 1987).

McLaughlin’s signature aesthetic of crisply formed rectangular shapes is exemplified by this painting, #26, 1960, which features four vertical rectangles in solid hues of blue, yellow, black, and red. The space around and between the bars, a neutral white, takes on significance through McLaughlin’s striking treatment of proportions, upending conventional designations of foreground and background. His meticulous composition is, in part, influenced by the Japanese notion of the void, as evident in the scroll paintings of Sesshū Tōyō (1420–1506), which featured empty spaces in an attempt to bring the viewer into the picture while conveying the concept of “emptiness” or a “marvelous void.”