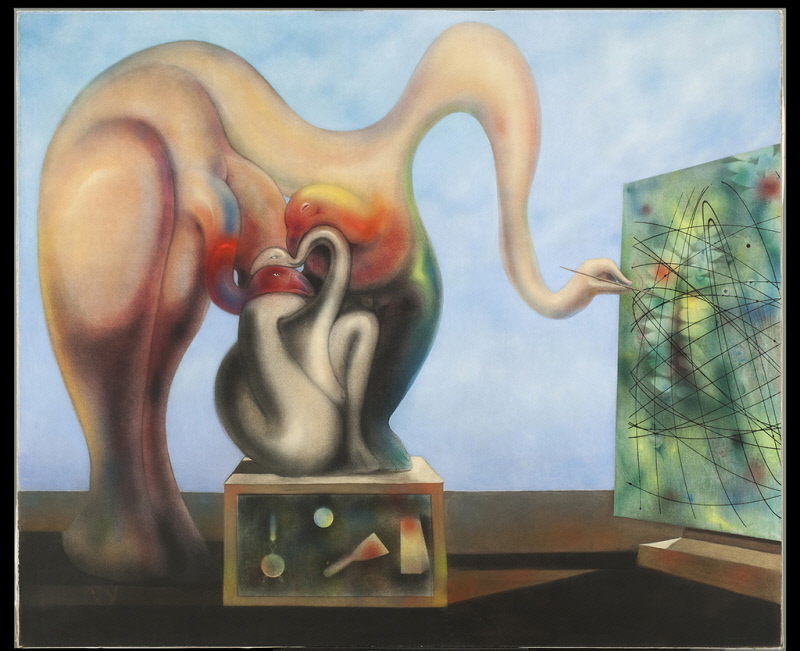 Labeled degenerate by the Nazi regime in his homeland and interned as an enemy alien in his adopted country of France, artist Max Ernst fled Europe for the United States in 1941. In 1942, he completed the monumental Surrealism and Painting. Described as “a huge new Freudian nightmare” upon its first exhibition later that year, the work takes its title from an essay from 1928 by André Breton, the founder of Surrealism—a movement that would count Ernst among its luminaries until his acrimonious departure from it in 1938. Here, an iridescent avian creature paints an abstract canvas of green daubs overlaid with crossing black lines. Ernst created these lines through oscillation, a technique of his own invention, which involved swinging a perforated tin can full of liquid paint over a flat canvas. Like many Surrealist techniques, including automatic writing, this may be understood as an attempt to liberate creative practice from the artist’s control. Oscillation, however, rendered Ernst’s mark-making less unconscious than fully bodily, a register of gesture in space. Ernst later described 1942 as a disappointing year: “Three absolute flops,” “no sales.” The one consolation was that that “the young New York poets and painters were enthusiastic,” including, he wrote, Jackson Pollock.