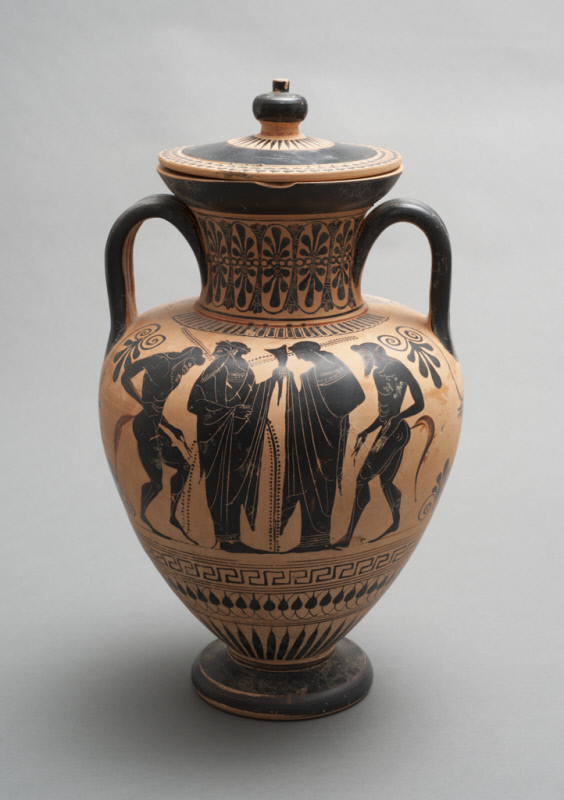 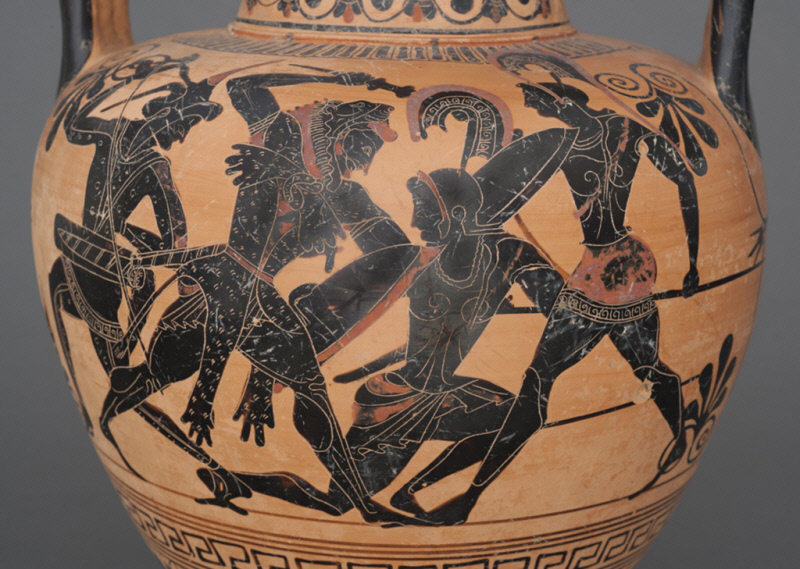 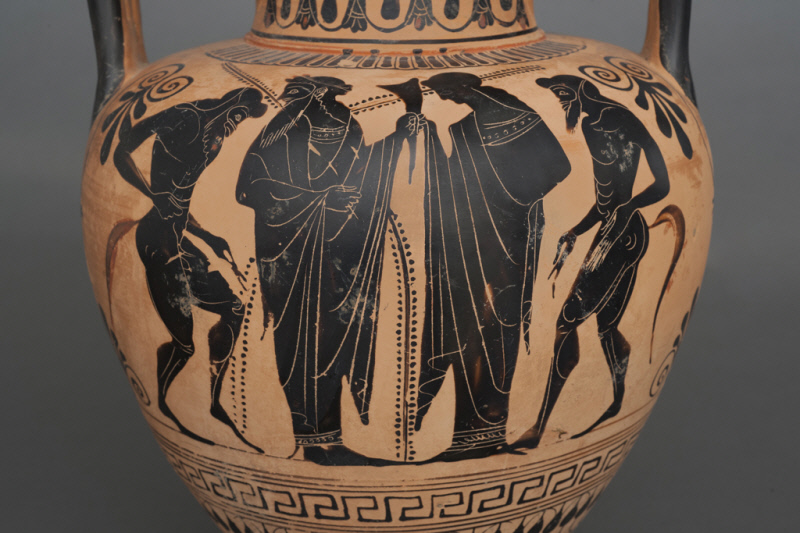 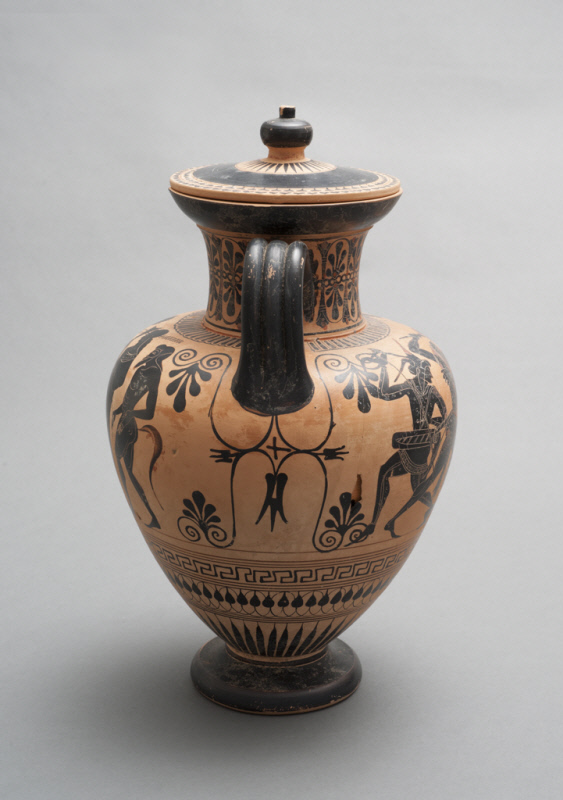 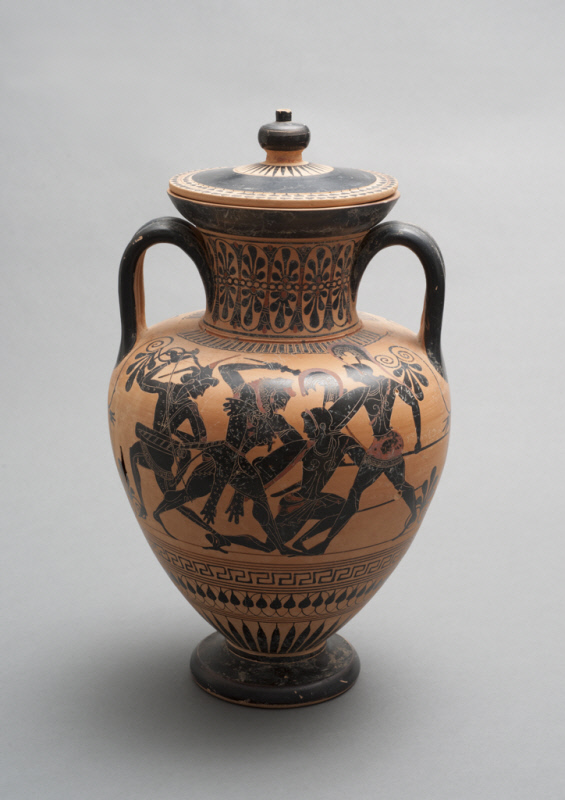 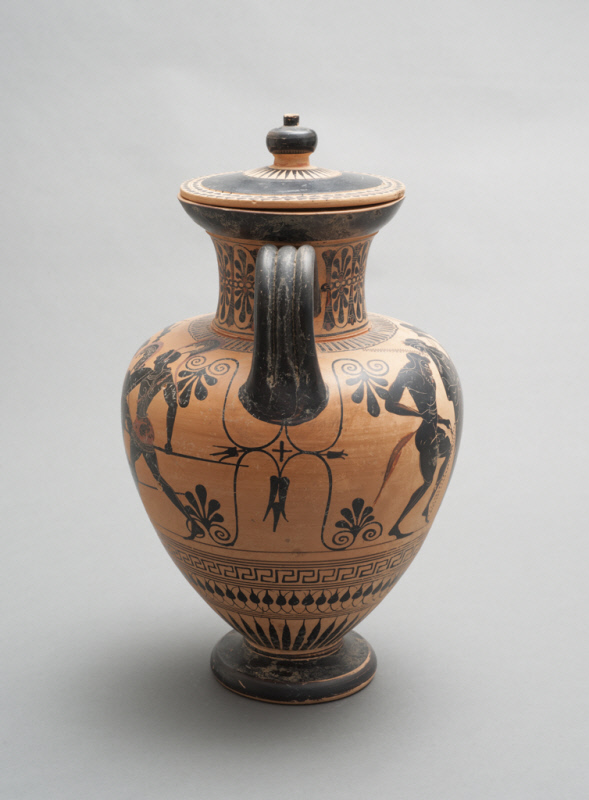 This black-figure neck amphora (jar) is attributed to the Antimenes Painter (active between 520–510 BCE) or another painter in the same workshop. The neck amphora is a standard Athenian shape that was regularly exported to Etruria and deposited in tombs. This particular container, acquired by the de Menils in 1965, is thought to have come from a burial in Cerveteri, Italy. The lid, although well-fitting, originally belonged to another vessel, likely from the same grave. The amphora is decorated in the black-figure technique with added red and white pigments. Each panel image, one per side, is framed by four palmettes with volutes.

On one side, Herakles (also known as Hercules) fights three Amazons. Herakles is identifiable by the belted lion skin he wears and his upraised knotted club. He directly fights one armored figure, who has fallen to one knee. As Herakles prepares to deal the killing blow with his knotted club, another armored figure with a shield and spear moves from the right to engage the hero. Both of these figures wear crested helmets and appear to have a few remnants of white pigment on their skin, almost entirely lost now. A third foe, holding a spear and a quiver and wearing a long-sleeved garment, leggings, and pointed cap, flees to the left of the scene. Herakles fights Amazons on multiple occasions in mythology, including the Amazonian queens Hippolyta, from whom he had to acquire her girdle as the 9th of his labors, and Andromache, whom he fought at Troy. This motif does not appear in images until the 6th century BCE.

On the other side, the Greek god Dionysos, with two crossed ivy branches behind him, holds a drinking horn (rhyton) to a woman standing in front of him. She clasps his hand on the rhyton and plucks at her mantle (himation). She is most likely Dionysos’s wife Ariadne. Satyrs dance on either side of the couple; both are bearded, like Dionysos, as well as have horse tails and very long fingers. Satyrs are companions of Dionysos.

The neck of the vessel is decorated with a palmette-lotus chain, a very distinctive feature for the workshop. Above the panel, a series of “tongues” alternating in colors borders the image. A simple meander, a type of decorative border with a continuous line, runs below the figural panels above an upright lotus bud chain and rays. This schema is common on vases by the Antimenes Painter and the associated workshop. Neck amphorae from this workshop often include imagery of Herakles or Dionysos.