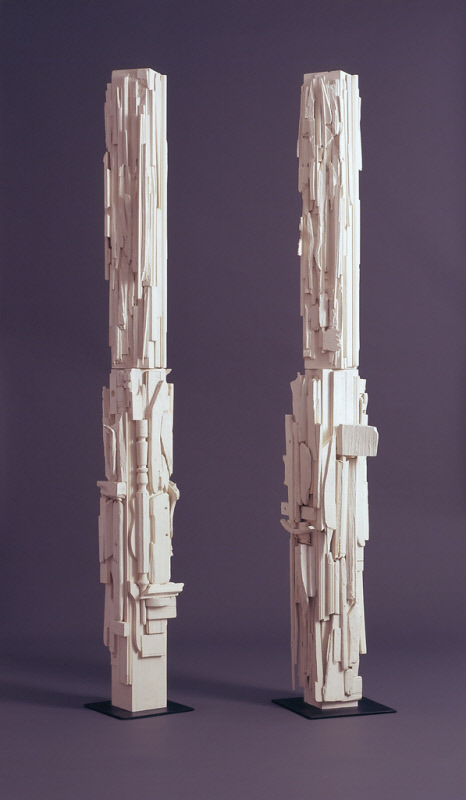 A pioneering post–World War II American artist, Louise Nevelson (1899–1988) used found wooden objects to create monumental, monochromatic abstract sculptures. Column from Dawn’s Wedding Feast is part of a larger sculptural group created specifically for the Museum of Modern Art’s landmark exhibition Sixteen Americans in 1959. Nevelson made it by nailing together salvaged architectural elements including banister balustrades and finials and painting each assembled component white. In the final, room-sized work entitled Dawn’s Wedding Feast, each component represented part of a wedding ceremony, from the bride and groom to the surrounding walls and chapels of the church. According to the artist, the title and the color refer to “early morning when you arise between night and dawn. When you’ve slept and the city has slept you get a psychic vision of an awakening, it is like celestial.” Although Nevelson hoped Dawn’s Wedding Feast would remain intact, its individual sculptures were separated and, in some cases, reused by the artist herself. Jean and Dominique de Menil purchased Column from Dawn’s Wedding Feast in 1960, one year after its inclusion in Sixteen Americans.