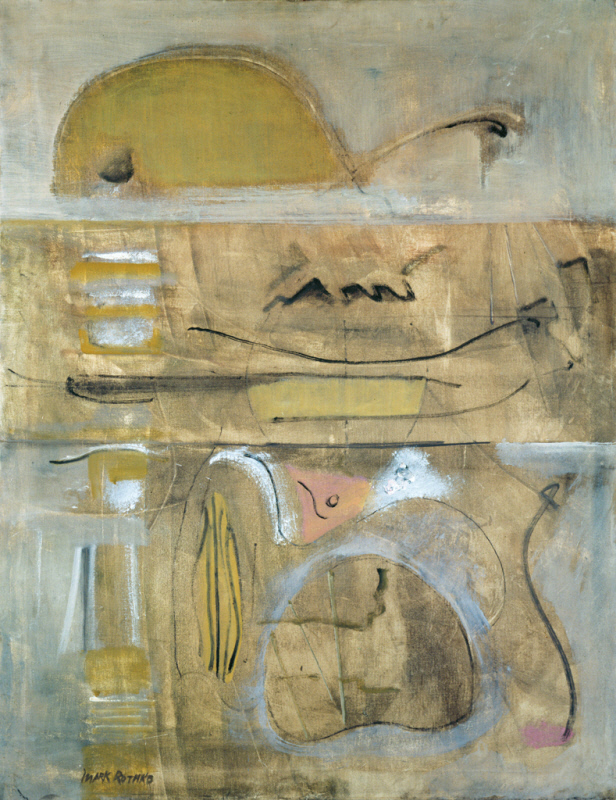 Astral Image was painted in 1946 while Mark Rothko was in the midst of an important transition. The painting is tied to the mythical subject matter that characterizes his works of the early 1940s, yet its forms seem to dissolve into near total abstraction. Just a year after painting this work, Rothko would begin building his compositions from the interplay of color shapes alone, leading to the Color Field paintings of the 1950s and 1960s for which he is so well known.

Rothko immigrated from his native Russia to the United States as a child in 1913. In New York City in the 1930s, he was a member of the Ten, a group of artists who sought to establish a brand of expressionistic figure painting distinct from the then-popular American Regionalist style. Like many artists of this period, Rothko was briefly supported by the Federal Art Project of the Works Progress Administration. Rather than working for the mural division, which sponsored large works following the examples of the Regionalists, the Spanish artist Pablo Picasso, and the Mexican muralists Diego Rivera, José Clemente Orozco, and David Alfaro Siqueiros, Rothko instead worked for the easel division, allowing him to create compositions of his own choosing such as scenes set in New York City’s subways. In the early 1940s, Rothko turned to subject matter culled from classical literature, Greek myth, and the Hebrew and Christian scriptures. In a 1943 letter to the art editor of The New York Times, he and painter Adolph Gottlieb spelled out why they were drawn to these sources. “There is no such thing as a good painting about nothing,” they wrote. “We assert that the subject is crucial and only that subject matter is valid which is tragic and timeless.”

In Astral Image, Rothko’s fluid black lines occupy an indeterminate state between abstraction and figuration, as if retaining something of his mythical subjects but refusing to cohere entirely. The division of the canvas into three distinct zones—like a landscape divided into land, sea, and sky—seems to anchor everything in a legible space. By 1948, however, Rothko’s paintings would shed the figurative elements of Astral Image as he became increasingly preoccupied by the relationships among the divisions themselves. These, too, would soon shed their faint allusions to landscape, leading to Rothko’s large paintings built from floating rectangles of color, the works that constitute his contribution to the establishment of Abstract Expressionism.