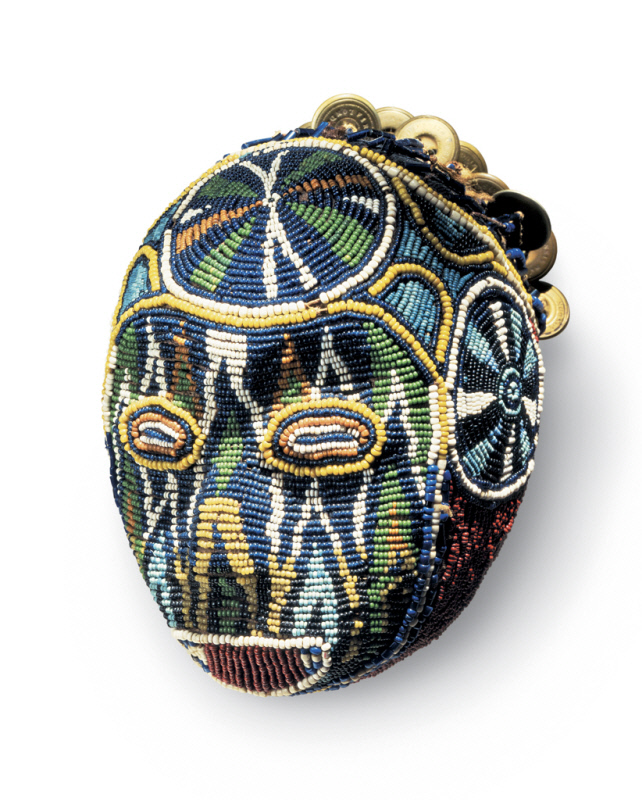 Beaded heads such as this, called atwonzen, represent trophy heads: the skulls of enemies felled in battle. Underneath the beading is not bone, however, but wood. Relatively rare (only six examples are known), works of this kind were associated with powerful otherworldly forces. A photograph of one atwonzen shows that it had been hollowed, possibly to create a cavity for spiritually charged medicines, and another was accompanied by a small leopard-skin bag containing herbal remedies. Atwonzen were found only in the households of mfo, or chiefs, and their closest allies. 19th-century carvings depicting human figures in the Bamileke area have historically been the exclusive purview of the society’s highest-ranking men, and the same is true of the ornate beading seen here.

Beading has a long and complex history in the Bamileke region and adjacent areas of western Cameroon. Extensive trade networks once linked present-day Cameroon and Nigeria to the Arab world. Among the prestige goods traded were beads made of coral and glass. Commercial ties with eastern Africa and the Indian Ocean also brought cowry shells, often mixed with beads to adorn works of art. Trade with Europe, which began in the late 15th century, introduced new types of beads, as well as buttons made of brass, porcelain, and mother-of-pearl. All were employed in the ornamentation of objects owned by high-ranking notables and chiefs—from cotton and raffia textiles to masks, stools, gourds, dance wands, and fly whisks.

The beads that cover the Menil atwonzen are European, and brass buttons manufactured in England are also present.1 The beads and buttons are attached to a length of cotton, which has been fastened to the wood core of the piece and then over-sewn. The beads are arranged in three patterns: on the face are chevrons, on the forehead and temples is a circular motif, and in between is an upside down U design. The chevron, widespread in Bamileke art forms, is commonly associated with themes of fertility, fecundity, and rebirth. It alludes to crocodiles and pythons, which play a key symbolic role in the arts. The upside-down U motif is quite common as well and is linked to the frog, another symbol of fertility. The circular design on the forehead and temples is more rare. It probably refers to divination practices and, in this context, may allude to the spider, commonly associated with wisdom.

Lessons from Below: Otabenga Jones & Associates
Arts of Africa